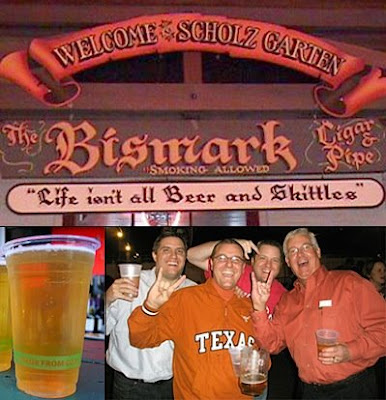 The booze cruise known as Thirst and 10 continues with a stop at Scholz Garten, a place that seemingly has been around longer than Texas.

History, food, booze, music. This Austin watering hole has it all. Two distinguished Longhorn bloggers have offered their opinion of the joint. First, let's hear from Henry James of Barking Carnival:

"The place to be before and after a Texas Longhorn game is Scholz Garten.

Founded in 1866 by a German immigrant, it has been around longer than the University of Texas.

"You can sit in the air conditioned inside area, but the real action takes place in the large outdoor biergarten. Here Texas fans of all shapes and sizes cram themselves in to either praise or curse coach Mack Brown. Healthy debate has always been welcomed at Scholz though. Whenever the state legislature is in session, it's a popular hangout for representatives and politicos of both parties.

"Like any good biergarten, Scholz has a host of German beers available. But the number one choice of Texas fans is Shiner Bock. It comes from the Spoetzl Brewery in the small town of Shiner, Texas (pop. 2070), located about halfway between San Antonio and Houston. And don't worry if you drink too much. Scholz is located within easy staggering distance of the stadium." 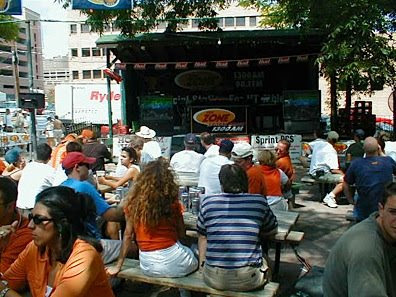 Matt Berg of Bevo Sports gave us this review:

"Talk about Texas history, Scholz Garten first opened its doors after the Civil War in 1866 and was a favorite meeting place for the German population around the Austin area. It serves classic German dishes such as Wienerschnitzel and Jägerschnitzel, though I don't recommend going there for the food.

"What it is known for is great beer (probably at least 20 different beers on tap), the large outdoor biergarten (patio), and history (self-proclaimed oldest business in Texas).

"With only a short walk to the stadium, this is the place to be, that is if you can find any room to stand. The large outdoor biergarten is filled with burnt orange and long lines of Longhorn faithful trying to beat the heat with a cold beer. Outside expect to find a live band, that is unless a radio station is running their pregame there. The atmosphere is crazy and energetic, and is something every Longhorn fan has to experience at least once."

Glowing reviews from the Texas bloggers, but there are many experienced drinkers in our audience who view each and every watering hole with a critical eye. Have you been to Scholz Garten? Thumbs up or thumbs down?

The Scholz Garten is a must for me before every Texas homegame. I wouldn't miss it.