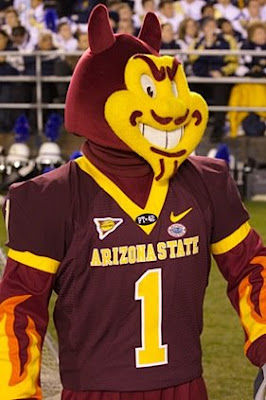 Our fourth look at spring games across the country. The Big Ten Network also video of several league games. Access it by clicking here:

Arizona State: Quarterback Rudy Carpenter struggled, completing only seven of 21 passes for 88 yards, almost half of those on a 43-yard touchdown to Brandon Smith.

Army: A bowl bid for the Black Knights? Receiver Mike Wright thinks Army can end a postseason drought that dates to 1996.

Bowling Green: It was all about defense, with Diyral Briggs getting five sacks and nine tackles. He also batted down a pass.

Central Michigan: Nobody got hurt.

Colorado: Things are looking up in Boulder, with Cody Hawkins back at quarterback and depth improving at other positions.

Colorado State: The Ram offense has been the focal point this spring, but the defense had its moments before an estimated 6,100.

Connecticut: Coach Randy Edsall experimented with using cornerback Darius Butler at receiver. Butler responded by catching a touchdown pass. The announced crowd was 9,700, but it appeared about half that number.

Duke: With David Cutcliffe breathing new life into the program, 3,250 fans — a number Cutcliffe claimed was a spring game record — showed up to see if this was the start of a magical turnaround.

Florida Atlantic: The Owls displayed offensive punch, but not enough to satisfy coach Howard Schnellenberger. "They should move the ball without error," he said.

Fresno State: Quarterback Tom Brandstater is good to go. The Bulldogs need to clean up the center position, which featured botched snaps and shotgun hikes that saw the ball sail over the quarterback's head.

Georgia Tech: Paul Johnson's team will pass, at least some. The spring game was about 75-25 run-pass.

Idaho: Sophomores Nathan Enderle and Quin Ashley split time at quarterback and a decision on a starter will likely wait until fall.

Illinois: Ron Zook hinted that his defense could be something special. It looked that way, with 10 sacks. The first- and second team offenses had minus-11 years in 44 carries.

Indiana: Tight end could be back in play for the Hoosiers. Max Dedmond, at 6-foot-5, 240 pounds, had four catches. By Indiana standards, that would be a good season, not a game.

Iowa: The Hawkeyes are facing a conundrum at quarterback, as the spotty play of Jake Christensen and Ricky Stanzi continued into the spring finale.

Iowa State: Alexander Robinson continued to shine at tailback. Phillip Bates and Austen Arnaud are still likely to split time at quarterback in the fall.

Kansas State: Not sure what to make of this. Josh Cherry's 51-yard field goal with 12:43 to go in the fourth quarter was the only scoring.

Kentucky: Nothing has been settled at quarterback, with Curtis Pulley and Mike Harline taking their battle into fall practice.

Louisville: An announced crowd of 17,200 at Papa John's Cardinal Stadium saw Steve Kragthorpe's team run only 12 series because of a lack of depth. Last year, Louisville drew 28,000 — a record.

Michigan State: The defense would appear to have several potential playmakers.

Missouri: The Tigers' balanced offense in the fall could be even better than the scoring machine that drove the Tigers to a 12-2 record last season.

Navy: Coach Ken Niumatalolo wasn't impressed overall by the performance in the Blue-Gold game, saying at "the Blue guys, especially the offense, were punching the clock."

Nebraska: They're drinking the Bo Pelini Kool-Aid in Lincoln, where 80,149 were on hand to watch the Cornhuskers.

Nevada Las Vegas: If you're a gambling man — and Las Vegas is a gambling city — Omar Clayton is the bet to be the Rebels' starter at quarterback in the opener against Utah State.

Notre Dame: The Fighting Irish were able to spring forward, but how far?

North Carolina State: Redshirt freshman Justin Burke appears to have thrust himself into the quarterback competition with a strong performance before 15,273.

Ohio State: The Buckeyes announced an attendance of 76,346, a figure that appeared about 15,000 or 20,000 too high. But those who braved the soggy conditions want to see the Buckeyes, who have made the BCS title game three times in the past six seasons, make the leap from runners-up to national champions.

Penn State: Evan Royster made his debut as the No. 1 tailback. Then his backup, Stephfon Green, stole the show.

Pittsburgh: The offense displayed the ability to play with confidence. Now it has to do it with consistency.

Tennessee: An announced crowd of 28,898 saw the first team offense score a lot of points. But it didn't come against the first team defense, which displayed an improved pass rush to go with a dynamic secondary.

Rutgers: The search for Ray Rice's successor continues. Kordell Young, who sat out this spring after knee surgery, could be the best option.

South Carolina: With Steve Spurrier Jr. calling the plays, quarterbacks Chris Smelley and Tommy Beecher combined to throw eight interceptions. Steve Spurrier said the suspended Stephen Garcia is likely to be back in the quarterback mix this fall.

Syracuse: The Syracuse Triple-A baseball team and the American Hockey League team drew more fans than the Orange for the spring scrimmage, a 37-play event that gave little indication of the team's future. The scrimmage was interrupted for a contest in which Syracuse's Rob Long punted the ball to a fan. If the fan caught the ball, they won $99. Long kicked four times and the fan, wearing a helmet, failed to catch a single punt.

Temple: A 75-yard touchdown pass from Vaughn Charlton to Bruce Francis was the day's highlight.

Texas A&M: Junior Mike Goodson had 58 yards in eight carries on the first series. Then he lined up at receiver and caught a pass for 17 yards.

Texas Tech: Mike Leach is not happy with his offense. "I didn't think we had a particularly good effort with our first group," he said. "Some of them may have had their nose in the newspaper, some of them may have been thinking about their family or their girlfriend."

Tulane: Just as they have all spring, receiver Jeremy Williams and running back Andre Anderson turned in strong performances.

USC: The Trojans ran a 97-play controlled scrimmage, with Mark Sanchez strengthening his grip on the starting quarterback job.

Utah: Coach Kyle Whittingham gave his team a grade of A-minus for the spring.

Virginia Tech: Sean Glennon had two touchdown passes and the Hokies may have found a receiver in Brandon Dillard.

Wake Forest: An enthusiastic crowd estimated at 4,100 watched the Demon Deacons put on an offensive show.

West Virginia: The run-heavy tendencies of Pat White could be over. The Mountaineers want to keep their quarterback healthy and having him run less is a way to keep him out of harm's way.

Wisconsin: The starting quarterback job appears to be Allan Evridge's to lose.

Wyoming: Quarterbacks Karsten Sween, Dax Crum and Ian Hetrick did little to distinguish themselves in the spring finale.
Posted by dawizofodds at 4:33 AM