Rich Rod Is Not Looking Too Good 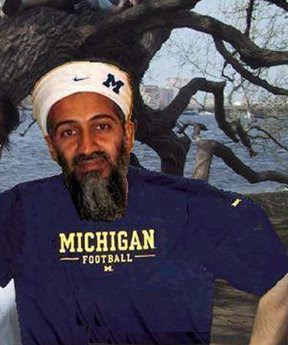 Things would appear to be going from bad to worse for Osama bin Rich Rodriguez, football coach, University of Michigan.

To simplify matters, let's introduce the parties involved in this story:

Larry Aschebrook, West Virginia senior director of athletic development. In other words, a fund-raiser for the university. Or was. He left the post earlier this week for a similar job at Arizona State.

Calvin Magee, former offensive coordinator at West Virginia. He now has the same title at Michigan. Magee is African-American.

Rich Rodriguez, Michigan coach who is being sued by West Virginia, his former employer, in an attempt to recover the $4 million buyout clause in the coach's contract.

On Thursday, the Associated Press obtained a sworn affidavit given by Aschebrook, who is alleged to have told Magee he would not have a chance at Rodriguez's former job because he was an African-American.

In the affidavit, Aschebrook denies ever making such a statement and implies that Magee was making the charge on behalf of Rodriguez, who was looking for a way to get out of paying the $4 million buyout.

"It is my firm belief that Mr. Magee has made these allegations simply to divert attention away from the valid-buyout provision in Mr. Rodriguez's contract with the University so as to taint the University in hopes that litigation can be resolved," Aschebrook said.

Aschebrook also detailed a conversation between himself, Rodriguez and Magee. Aschebrook alleged Rodriguez made him a promise of employment at Michigan and added this statement: "This isn't about you Larry, it's about me. You can't afford it, I can't afford it. I don't have $200,000 in the bank. I'm paying for [wife] Rita's family, my family, and [West Virginia is] doing this to me. I'm sorry about this, but it's business not friendship."

Dave Hickman of the Charleston Gazette has an interesting take on all of this:

"Face it, the Aschebrook deposition is just one piece of explosive evidence in a case that figures to have many. When Rodriguez and Magee spin the conversation their way it will come out dramatically different, which will make this another he-said, she-said. Maybe it will be significant, maybe not. There are still a lot of other pieces to the puzzle.

"Still, on this day at least, chalk a big one up in the WVU column."

Thanks to Colin, Raman, Chill and John.
Posted by dawizofodds at 4:32 AM

My take: Magee's agent never claimed that Aschebrook was a racist, just that he delivered a message about the WVU powers that be. Aschebrook is upset that he is now being portrayed as a racist by the media. That is not Magee's, Rodriguez's or their agent's fault. No where in the conversation did Rodriguez or Magee say that the claim was false. Aschebrook is the only one denying it. Seems like just another "he said-he said" pissing contest.

Rodriguez offered him a job because of their previous relationship, not for some grand X-Files type, cover-up scheme. He was trying to help out a loyal friend, who unfortunately got caught in the crossfire. Seems like a pretty stand up move to me.

The only issue here is whether or not Aschebrook really said what Magee's agent claims he said. There is no way to prove that, and nothing said by Rodriguez or Magee (as stated by Aschebrook) contradicts that earlier claim.

For full disclosure, I will admit that I am a Michigan man, and this whole situation sickens me. It needs to end now.

But, the affidavit is far from explosive... more like a bunch of smoke in a disgusting back and forth PR battle. Nothing in that document tells me anything of substance other than the fact that Aschebrook doesn't like the way everything went down.

What did Rodriguez do wrong? He told a "loyal" friend that he could get him a job at Michigan. Why does that reflect poorly on RR?

The problem is that Magee's agent Mike Brown said Aschebrook told Magee, who is black, that he wouldn't have a chance at Rodriguez's former job because of his skin color.

My personal guess is that Mike Brown has been waging a PR war to help Rich look like the good guy in this and that this racism claim was part of that PR spin.

I do agree with you that this will just be more he said/she said BS that we will have to sit through until the matter of the 4 million buyout is done.

Ideally this will end quickly so we can all get back to obsessing over recruits, spring practices, and next years schedule.

I'm sorry, but this affidavit (assuming it's true) clearly has Rich Rodriguez responding to someone saying that they didn't want to be part of something that wasn't true by offering him a job.

No questioning the statement that he was being sucked into something that wasn't true - just "I'll get you a job". Rationalize all you want, this reads like an attempt to buy this guy's cooperation in perpetuating a falsehood, or at least make him think he would be rewarded.

There is no question that some reporters have jumbled that facts and made it sound like Aschebrook was accused of being a racist, which is not the case. But that is completely beside the fact that this fellow (who appears to have no axe to grind)is painting a pretty clear picture of three men who have fabricated very serious allegations against an institution of higher learning for no reason other than their own economic benefit, and reacted to being called out by someone who they wrongly implicated in their attempt by offering to buy his cooperation.

If you can't see the problem here, you are in serious need of an ethics course.

...and claiming that someone made racist remarks or that someone's family is being harassed with zero proof to back it up isn't? I mean he could've called the cops concerning the latter, but then again that would've been filing a false police report which is a no no.

if you recall, it was RR's agent Brown who first made the racism accusation. I wonder if RR and Magee even knew he was going to do that. An accusation like this is going to be taken seriously and investigated. For months Magee gave very vague answers on the topic. I think when pressed they had to manufacture a name. Now they need that person to back up the story. In exchange for his cooperation, RR is offering Aschebrook a job at Michigan. To sum up, in a matter of material significance to RR, he is asking Aschebrook to file a false affidavit in exchange for the offer of a job at Michigan. RR really could end up in "the big house" this time.