It's Time to Put Overtime Rules in the Toilet 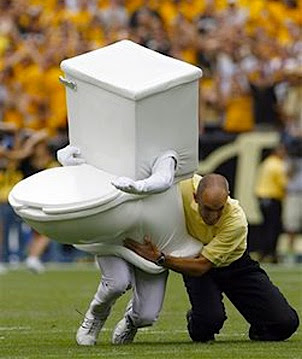 The Football Rules Committee continues to seek ways to speed play during regulation, but when it comes to overtime, the clock is stopped.

Several rules announced last week were the latest attempts to reduce the length of games, but overtime remained untouched. That would appear to be an oversight, especially after examining the list of the 10 longest games of 2007. The top eight went into overtime.

As overtime rules stand, each team gets a possession starting on the opponent's 25-yard line, putting the ball well within range of kickers in this day and age. There is a play clock but no game clock. Beginning with the third overtime, teams are mandated to attempt a two-point conversion after a touchdown. These rules have resulted in an ultra-conservative approach by coaches and multiple overtime games.

Here's what can be done:

Overtime possessions begin on the opponent's 40-yard line. No more rewards for teams that fail to advance the ball. As it stands, teams can send out the kicker and likely get a field goal even without advancing past the 25. Putting the ball at the 40 would reward teams that are able to advance into field goal range.

Why not just be men and have a sudden death - no field goals allowed, visitors get the ball first? That what tough guys would do.

I dont think SD works in college when so much is on the line...in the NFL there are so many games and so many playoff spots....

I don't like the 40 yard line thing, especailly with the 2 min clock, you are going to have teams kicking the ball 80% of the time (i just made that up, but I'm guessing it would be very high).

Stoops has been lobbying for the 40 yard line for a few years now. I'm all for that. However, I still think not having to go for 2 until after the 2nd OT is best. As for the 2 minute clock, you're encouraging teams to throw more so it could be a wash.

Overtime needs to be eliminated. Ties will be counted as losses.

I love your proposals, especially putting the clock back in the game.

As for going for two, I'd love to see the NCAA adopt a rule from the old World Football League to eliminate the most worthless play in football. A touchdown was scored as seven points (to make it worth more than two field goals) and you had a run-pass option for another point. This was appropriately called an "Action Point."

I've gotta ask, and I know it has nothing to do with the topic - but what's the story behind the toilet being tackled?