Crime Rate Through the Roof in Iowa City 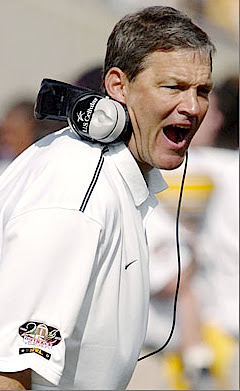 While Iowa's Kirk Ferentz was off on a Caribbean cruise, two more of his players got into trouble over the weekend.

That brings the total to 14 arrests involving 13 players in the past 10 months. More troubling news could be coming.

Officials continue to investigate allegations of sexual assault in a dormitory room last October. Three members of Iowa's team were questioned in connection with the incident.

In another embarrassing moment last August, photos of Iowa players with large amounts of cash and liquor bottles appeared on one player's Facebook page.

Then you have Albert Young, a senior running back last season, saying this about the crime spree in Iowa City:

"Things definitely have gotten out of hand. There is no way around it. And it started happening even before the season."

Ferentz had a marvelous run from 2002-04, when his teams totaled 31 victories. Any legal problems were overshadowed by the winning. No more. Ferentz, who mysteriously had his contract extended through 2013 before his cruise, has a 19-18 record the past three seasons.

At least Iowa owns the rights to FireKirkFerentz.com.
Posted by dawizofodds at 3:10 AM

No doubt this is a problem, but what the hell is Ferentz suppose to do??? Babysit them every weekend?

Ferentz really can't do much. He can only punish those who get in trouble. It is fun watching the Hawkeyes lose though.

Check out this link and the SWA-Weet pics at the bottom.

DD is a class act moron. If he has all this cash, what's his dumb A$$ doing shoplifting $9.99 DVD's from the bargain bin at WAL-MART?

Every parent should see this as a "do I want my kid playing for,or around these other thugs" He(and admissions) obviously lets in a lot of low character kids.

What is he supposed to do? Well how about for starts NOT RECRUIT THUGS. History has been full of teams that have rosters filled with thugs that have no intention of getting an edumication just so they can win. But that is the saddest thing of all. Even though they recruit thugs, they still suck ass. But when the coach is making 10X that of the university president, I guess the "it's all about the Benjamin's" mentality trickles down.