When the Law Looks the Other Way 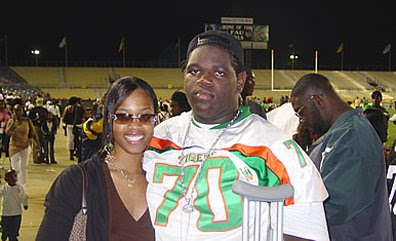 How did Florida's Ronnie Wilson escape the long arm of the law and did the fact that he was a football player help his cause?

Wilson appeared to have violated probation on Jan. 6 after he was arrested on a marijuana charge, but that charged was dropped in part because the case was considered weak, according to the state attorney's office. An official also said, according to Joseph Goodman of the Miami Herald, that "there was an understanding that the University of Florida was going to take over the case and impose disciplinary action."

Instead of any disciplinary action, Florida appears to have rewarded Wilson, who had already been booted out of school after he pleaded guilty in August 2007 to misdemeanor charges of battery and discharging a firearm (an AK-47 assault rifle) in public. Wilson was allowed to enroll for the spring semester on Jan. 7, one day after his arrest on the marijuana charge. His miraculous turnaround continued this week when he rejoined his Gator teammates at practice.

Wilson's probation, according to the court document, stated: "Live and remain at liberty without violating any law. If you fail to complete the terms of your probation as required, you will be arrested ..."

Wilson's probation also included 100 hours of community service, which he is said to have fulfilled as an assistant offensive line coach at his high school, Pompano Beach Blanche Ely. Goodman blogged that the service forms signed by an Ely assistant "have that unmistakable look of something that was filled out all at the same time — Wilson was at Ely nearly every day from August 22 to October 10."

Goodman contacted James Jones, who was then the head coach at Ely, and Jones said Wilson was at practice only "twice a week."

Goodman has received some quality email from Gator fans, but the Herald reporter wrote that he thinks coach Urban Meyer is doing the right thing by allowing Wilson back on the team:

"It probably doesn't matter to Meyer at all if Wilson ever plays a down of football for the Gators. If Wilson graduates, then it was all worth it."

Thanks to Kevin at FanBlogs.
Posted by dawizofodds at 1:16 AM

"Discharging a fireman?" Doesn't that make him a sex offender?

the SEC knows no law when it comes to differentiation. i'd be willing to bet they'd welcome a murderer to one of their 12 teams.