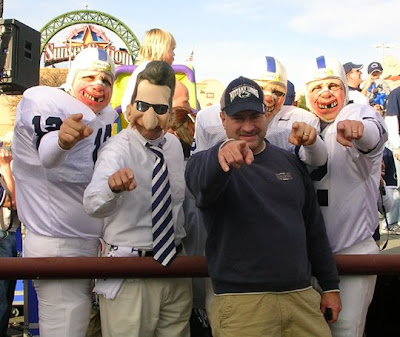 It took 32 years to complete, but Steve Koreivo of Stanhope, N.J., has watched each of the 119 teams in Division I-A play in person at least once. He has chronicled his accomplishment at College Football Fan.

And he's not finished. He plans to see Western Kentucky play in 2009 when it becomes the 120th member of I-A.

"Now that my goal has been achieved, my wife is asking me why I’m still going to these games,” Koreivo, 51, told the New York Times.

Laurie, his wife of 19 years, knows that answer. "College football is in his blood," she said.

Thanks to Kevin of We Are Penn State.
Posted by dawizofodds at 12:25 PM

A disclaimer is in order. Note the language of this achievement.
He "has watched each of the 119 teams in Division I-A play in person at least once." He has not been to ALL 119 Division I-A football stadium venues. Nevertheless, it is quite an achievement and serves as a sign that another college football autumn is upon us.

I think anyone with a brain could figure out what you felt you needed to tell everyone.

the man has seen all 119 teams play. give the man his due.

Hey, jerk. It takes a real scab of an individual like yourself to post
a rude comment without a name or ID. Truly gutless. My point is that it's one thing to see every Division 1-A team in person (with the exception of a few Sun Belt teams, I've seen all the schools in person myself), it's another thing to take the effort to travel to the venue of each school to watch a game. Regardless, I contacted Steve myself to congratulate him on this experience. While I attend THREE different D1-A venues on Labor Day weekend, you'll probably be sitting on the couch watching ESPN thinking you're a real fan. Don't trip over the beer cans, pal.

Shut up Greg. No one cares about your 'achievements'. Surprisingly, the article wasn't about you and your undoubtedly incredible life.

But please do keep us up to date on your travels, we're all sitting on the edge of our chairs waiting to hear what you're up to.