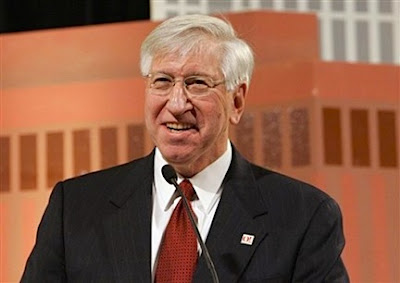 Times are tough. The economy is a mess, corporate America continues to send jobs overseas, workers everywhere are getting laid off and yes, "student-athletes" are still being exploited.

Then there is one Myles Brand, head of the NCAA. His compensation for 2006-07 was $935,000, a 4% raise from the previous fiscal year. That is more than every public university president in the country.

Yes, the NCAA, which listed its tax-exempt purpose as keeping sports as "an integral part of the educational program and the athlete as an integral part of the student body," is rolling in money. At least eight other officials are pulling down over $275,000. The governing body also paid $971,000 to a company that provides charter air travel. Must be nice not having to rub elbows with the common folk.

People should be outraged. At least one group took action. A class-action lawsuit brought by former college athletes who alleged the NCAA failed to cover the full cost of their education was settled earlier this month. The tax records revealed that the NCAA paid $18.6 million for plaintiffs' attorneys' fees and a fund for former athletes to settle lawsuit.
Posted by dawizofodds at 12:48 PM