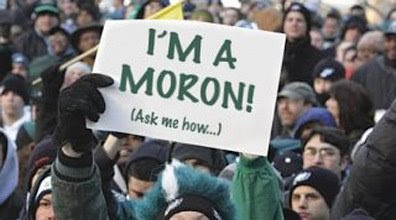 On Wednesday, Conradt lifted a template off the website of the Oklahoman and created a bogus page and story about Sooner quarterbacks Sam Bradford and Landry Jones being arrested on cocaine distribution charges. Conradt then posted the story on a message board and it was soon reported as fact on at least two Texas radio stations.

Officials at the Oklahoman were eventually notified and they were able to track down Conradt as the person behind the post.

Although Conradt has apologized, his problems are only beginning. "I'm going to prosecute him to the fullest extent of the law,” said Kevin Jones, Landry's father. "I've got deep enough pockets to do it.”
Posted by dawizofodds at 3:56 AM

Hope the two radio stations have to pony up too because that's just asinine for them not to verify the story.

Conradt clearly is an idiot. How can an adult make up a story that could impact the lives of two young men. Most likely, even though this was a hoax, the question of the innocents of the two young men may follow them all their lives. What a cruel and sensless joke. He should pay a heavy heavy price.