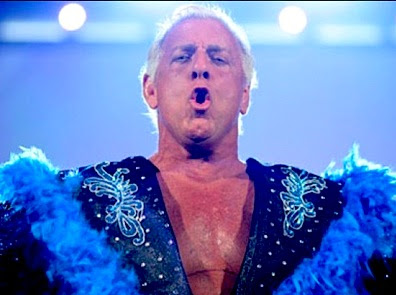 We continue to fight for you, the college football fan.

With salaries skyrocketing for coaches and ticket prices rising just as rapidly, fans deserve to see quality games each and every week. Seriously, what good does it do when your team schedules DeVry Institute? Such a game amounts to a glorified scrimmage. Why don't college football's heavyweights go toe-to-toe each week?

As Ric Flair says, "To be the man, you have to beat the man."

That brings us back to the fantastic study by Ed Gunther of National Championship Issue. Last week we talked about teams that have been feasting on cupcakes in nonconference play for the past 10 years. Today we present a conference-by-conference examination of scheduling. 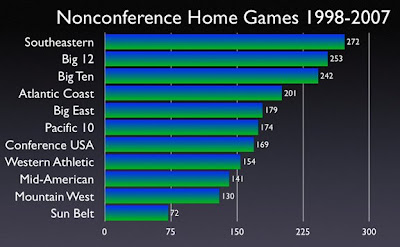 This first chart details the total number of nonconference home games the past 10 years. Not surprisingly, Bowl Championship Series conferences occupy the top six slots, with the Southeastern Conference leading the way. 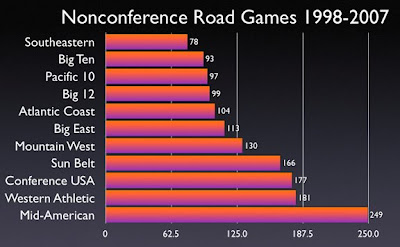 Charting the total road games shows how seldom teams from the power conferences pack their bags for nonconference play. Check out the Southeastern Conference, whose teams have played only 78 nonconference road games in 10 years. Amazing. 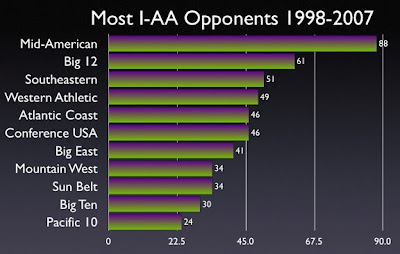 Now take a look at the total number of I-AA opponents scheduled for home games the past 10 years. Of the power conferences, the Big 12 and the SEC lead the way. Since the NCAA adopted the divisional setup in 1978, only five I-A teams have not played a I-AA opponent. Those teams are Michigan State, Notre Dame, USC, UCLA and Washington. 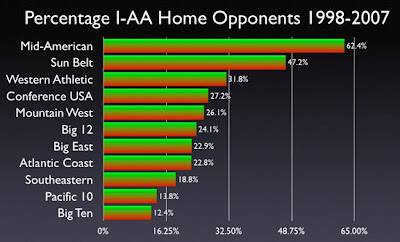 Here's a breakdown of the percentages of I-AA opponents booked for home games. This shows the class system in college football, with lower-level I-A conferences scheduling a higher percentage of I-AA teams in nonleague play.

Seldom does the team from a power conference travel to a lower-level I-A opponent. And Arkansas is using a new trick to make it appear the Razorbacks are playing more road games when they're actually not.

Louisiana Monroe, which entered into a five-game agreement with Arkansas in 2003, will be paid $500,000 for a game in Little Rock on Sept. 6. As part of the deal, Louisiana Monroe will be designated as the home team in order to use the crowd count for its home attendance figures.

Welcome to fraudulent world of college football in 2008.
Posted by dawizofodds at 3:57 AM

This analysis of non-conference scheduling is ridiculous. It isn't as black and white as this "study" makes it seem.

E.g. what about scheduling conflicts, teams that get dropped, etc...Like Texas Tech this year who had Tulsa drop them for Ark.

And you cannot ignore the money issue. Do you know how much money the town/the University/the area around Auburn, Alabama makes on a weekend when Louisiana-Monroe comes in? Why would the AD forsake a prized weekend and take the show to a "lesser D1-A" town just for the sake of a slightly more difficult schedule? Take Texas Tech again. They were in talks with LSU. LSU wanted to play a one and done at Baton Rouge or have a home-neutral with the neutral to be played in Houston. LSU doesn't want to waste a whole weekend in Louisiana and Tech doesn't want to whore themselves out.

actually, it is exactly as black-and-white as these numbers (except that the poster could have adjusted for conference size in the graphs--i.e. SEC has 12 teams, Pac-10 has 10, MWC has 9, etc., so "total number of road games" is less interesting than the average number per team per year).

you are obviously a homer of a team and conference that looks bad in these numbers.

that is to say, the "money issue" is an explanation for the discrepancy--not a reason that no discrepancy exists.

meanwhile, the discrepancy itself is supremely "black and white."

I agree the numbers are black and white and I cannot argue against them...I should have been more specific in my questioning of the post itself as it relates to the facts.

With a comment like "Welcome to the fraudulent world of college football," it tends to gray the black and white issue when none of the "why's" are considered. I am a "homer" for Auburn and I do not think playing all of our games at home makes us look bad at all when considering all of the "why's."

One reason that cup cakes might be schedule higher is the difficulty of the conference regular schedule. That would explain USC, Mich, etc. I would also say that the upper level of I-AA could be harder than the lower I-A team for team. Ask Mich vs Appl State. Yea, I'm a homer but the bigger university give the smaller ones a lot of $ that they really need for their schools.

If the SEC is as powerful and great as they want everyone to believe you would think they wouldn’t be afraid to play a legitimate non-conference schedule
what are they afraid of ....? ooops my bad BCS bull crap points

this is a waste of time, the SEC rules and everyone knows it.

There is no doubt that playing a cupcake at home is good for the finances but it also inflates a school / conference strength. Scheduling 3 wins means a team only has to win 3 of 8 conference games to be bowl elgible. The SEC speacilizes in this type of scheduling which allows teams such as South Carolina, Alabama, Kentucky, and Vanderbilt to appear as a quality team when in actuality these schools are no better or worse than schools in other BCS conferences finishing in the same position,. ie Big 12 #7, Big Ten #7, and SEC #7 are all the same.

The SEC has the most BCS championship game wins. Of those wins, they include the last 2 (3 of the last 5).

So what's the point? The SEC HAS proven they'll play legitimate teams...and beat them more often than not, when it comes to the BCS bowls and the championship. There's no reason to get banged up any more than what is necessary because you want to maximize your chances of winning a championship. It's no secret that the BCS teams generally have the best talent in college football. That increases potential injuries to skilled positions. If a small school sucks at pass rushing, then your quarterback doesn't have much to worry about. If the small school has a weak line, then your running backs can break through the hosses in the front and get to the secondary where the punishment is much less.

The scheduling works, so they must be doing something right.

Also, one reason why big conferences do not often schedule each other during the regular season is because the conferences have bowl tie-ins and they really don't want to schedule something that could end up as a potential bowl matchup later on in the season. There are arguments both ways for that - a rematch could create a lot of hype...but at the same time it could kill a lot of hype. It all depends on how the outcome of the first game was.

This also assumes that conference strength is equal top to bottom. I would agree that the Big 12 plays a lot of "cupcakes" but how many of those games have been by cellar dwellers like Baylor, Iowa State, Kansas (until last year). At the same time just because you don't play 1-AA schools doesn't mean you aren't playing teams 100-120 of Division I. If we didn't have Top 25 polls until October teams would be rewarded not penalized for playing tougher schedules. 2-2 Team losing to App St & Oregon and beating Notre Dame & Akron out of the top 25; 2-2 Team losing to Virginia Tech & USC and beating Alabama & Oklahoma...Definitely Top 25 worthy. Taking the votes away would allow us to analyze GOOD LOSSES vs. BAD WINS

Hey, Ritty - I think I figured out why you have no problem with Auburn playing all of their non-conference games at home. They actually traveled outside of their state to a cold-weather area for a non-conference game - and they are losing to W. Virginia!

If the SEC played more non-conference road games they wouldn't be considered "the best conference" year in and year out. They are built to play in warn weather and they never have to leave that comfort zone - even for bowl games. The Big 10 and Big 12, on the other hand, have to be prepared to play warm weather games earlier in the year, but don't even go bowling unless they can win slug matches during Midwest blizzards in November and December - speed means nothing in the Midwest during November and December. But, come bowl time, the Big 10 and Big 12 teams must turn around and play a fast, warm weather game against a team specifically built to only play in that weather.

The SEC is a fraud. Send LSU, Auburn, Florida or any other SEC school to play cold-weather games in the state of Iowa, Illinois, Missouri, Kansas, Nebraska, Michigan, Ohio or Wisconsin, and see how well they do.