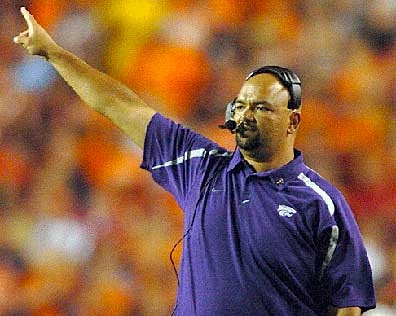 In a day of scheduling maneuvers, not much was made of Kansas State's decision to back out of a game against Fresno State. At least not much was made of it in Kansas. But in Fresno, well, that's a different story. They are getting quite the laugh out it. Matt James of the Fresno Bee picks it up from here:

"A Kansas State administrator admitted his school was trying to get out of the Fresno State game a while back, but now it's a reality worth repeating: A Big 12 school paid $250,000 to get out of a home game against the No. 3 team in the Western Athletic Conference. A home game.

"Kansas State coach Ron Prince went 12-13 his first two seasons. This spring he's signed 19 junior college transfers and the acting athletic director, Jim Epps, said it was Prince's idea to get out of the Fresno State game and find a team the Wildcats could, you know, beat.

"How's that for a preseason message to your team? Not exactly Notre Dame's Play Like A Champion Today, is it? More like, We'll Get Bowl Eligible Somehow.

"Kansas State should change its logo from the Powercat to the Panic-cat."

Fresno State, never a team to shy from competition, will now play at Rutgers to open the season. Kansas State, in a move reminiscent of Bill Snyder's approach to scheduling, will play host to Montana State.

Fresno State has been nothing but trouble for Kansas State, beating the Wildcats 45-21 in 2004 and 45-29 in 2007. Prince, who talked about upgrading Kansas State's schedule when he was hired in 2005, has now called a reverse.

The scheduling facelift gives the Wildcats nonconference home games against North Texas, Montana State and Louisiana Lafayette. The only toughie in the bunch is a game at Louisville. At worse, Kansas State should be 3-1 entering Big 12 play. If the Wildcats can squeeze out three more victories, they might get a bid to the Texas or Independence bowls. And Prince will be able to hold on to his job for another year.

I am so glad that Division I-A football lacks a playoff; otherwise, the season would lose all meaning.

I hope those assclowns who support the bowl system enjoy the K-State game on Fox Southwest.

I know Kansas had a good season and all last year from this... but probably not the best way to model your rival.

Please take a look at this:

what's new about that. Bill Snyder padded his record against cupcakes. It is the KState way!

Lost in that whole article is that Kstate plays at Louisville. Plus most teams have bought out there fresno contract because they are an awful team to host and to visit. Never seen a more unprofessional bunch of coaches and players in my life. I'm sorry but the entire team grabbing their crotches and flipping off fans plus destroying their hotel room. thank goodness we don't have to deal with these degenerates any more

I don't care for Fresno, but they're a better opponent.

The program will be in shambles until we get a new coach.

If they beat Fresno State, no one really cares.

If they lose, everyone will think they suck.

You people forget that Fresno State gets absolutely no respect as a number 3 team in WAC. I'd pay 250,000 grand to get out of an obvious trap game like this. They would probably love to have Boise State or Hawaii at home since beating them would actually mean something.

To the assclown who are said that Fresno State gets no respect in the college football world...do you even follow the sport? They are one of the most respected non-bcs teams out there! And they are a preseason top 25 team for the upcoming season (something Boise St and Hawaii are not!) I just love jackass posts that have nothing to back them up! Probobly a KSU pussy fan!

KSU pussy fan? Nice post jackass. You might want to quit your job at the local supermarket and go back to school to learn a new vocabulary. Or is that what you learn at Fresno St.?

Unfortunately, the previous poster was right. Every game vs a Non BCS school is a trap game. The only problem with this is, if you schedule them, you should play them. Fire Ron Prince NOW!

NO, don't fire him! Get Ron Prince an contract extension NOW!! I'm loving this. After seeing the trailer-trashitude of the KSU fanbase firsthand, seeing them return to their... "tradition" has been glorious to witness.