The Closed World of Nick Saban 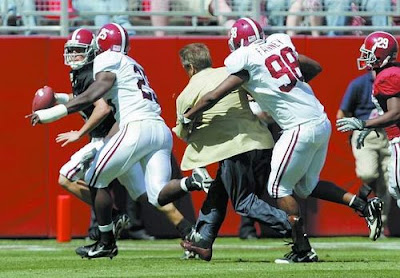 Alabama coach Nick Saban showed up for Saturday's A-Day scrimmage looking like he was going to church. There he was, wearing a gold blazer, gray slacks and brown tasseled loafers, wandering the field at his leisure, often positioning himself behind the offensive backfield.

But as quarterback John Parker Wilson was forced to scramble, Saban suddenly found himself in the middle of the action, nearly being run over by defensive lineman Brandon Fanney. After reviewing Saban's poor blocking technique, we've decided to revoke his scholarship in an attempt to get the Crimson Tide under the NCAA limit of 85.

While Saban's team might not yet be ready to run with the big dogs, his handling of the press continues to draw fire. Last week there was the incident involving the Mobile Press-Register. Now we learn that reporters are about the only people who can't get access to Alabama practices.

Saban has allowed a crew from FSN South to film an all-access look into the program, which will begin airing in the middle of May. In addition, he has let in several hundred high school coach and prospects.

Writes Ray Melick of the Birmingham News: "Practices are closed to the people whose presence does not offer Saban something of value in return — basically, the beat writers who cover Alabama teams day-to-day and random fans who used to be able to drop by just to be able to go home and say they were there.

"And now we know what it takes to 'open' Saban's program: Show him where it benefits him, particularly in recruiting, which is the currency of most value in Saban's world."

Thanks to Losers With Socks and Deep South Sports.
Posted by dawizofodds at 3:11 AM

sounds to me like saban has it pretty well figured out. the media will use saban to sell papers/get ratings every chance it gets. i'm not going to feel sorry for them when saban uses them right back.

I am proud to have him as our coach!