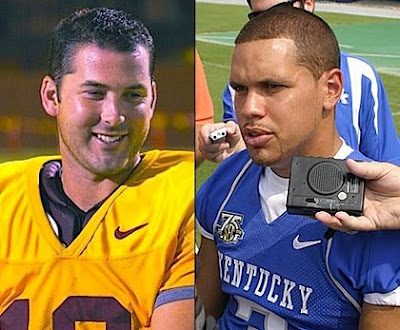 More information has become available on the closely guarded Wonderlic scores of NFL quarterback prospects. Mac Mirabile has posted his annual look at the scores and John David Booty, left, formerly of USC, and Andre Woodson, formerly of Kentucky, are at the bottom of the list.

According to Mirable, Booty and Woodson each scored 14 out of a possible 50.

To put this in perspective, Terry Bradshaw scored 15 when he took the test in 1970, according to Mirabile's site. Pat McInally, a graduate of Harvard, is thought to be the only player to score a perfect 50.

A score of under 10 is an indication of literacy problems.

The average score for a quarterback is 24. Offensive tackles average the highest score at 26.

Texas' Vince Young reportedly scored a 6 when he first took the test in 2006. He was given another opportunity and scored 16. Florida's Chris Leak allegedly scored an 8, but his tally has since been updated to a 12 on Mirabile's site.

Former Iowa State running back Darren Davis reportedly has the lowest score for a prospect, a 4. 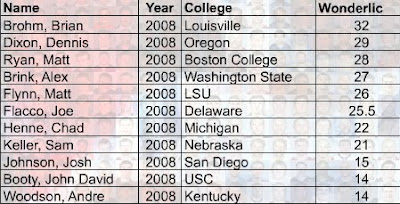 Posted by dawizofodds at 4:18 AM

Athletes dont goto USC for an education. I would be shocked if Booty could even find a classroom on the USC campus.

how do you get .5 on a multiple choice exam?

Chris Williams from Vandy scored a 32 as well.

Good one about USC. Apparently you are just a muppet to think that athletes do not go to class. Shows more ignorance than a 14 on a wonderlic test.

Wonderlic isn't a complete multiple choice. That's why there is a .5. There are a few fill in the blanks where you are asked to write a synonym to a certain word. You can get .5 based on how weak or how strong the synonym.