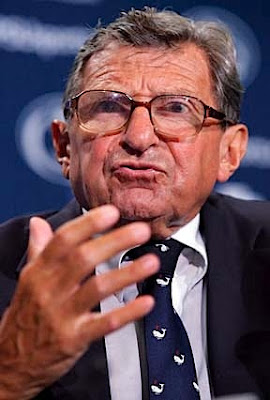 Will Joe Paterno be swept out as Penn State coach after the 2008 season? We could have the answer by the weekend.

The Penn State Board of Trustees is expected to address Paterno's future during meetings Thursday and Friday at the Renaissance Mayflower Hotel in Washington.

"It'll definitely be on the menu," a trustee told the Pittsburgh Post-Gazette.

Paterno, 81, has fallen out of favor with university president Graham Spanier and key trustees, in part because of an embarrassing string of incidents involving the coach and his players.

"He's always saying that this is what he likes to do, that he doesn't play golf or have any other hobbies," one trustee told the Patriot-News last month. "Well, that isn't our problem. I think if he wasn't the coach, he'd still be as busy as ever."

Yet another Penn State player was arrested last weekend. Tyrell Sales, a starting linebacker, was charged with defiant trespass and disorderly conduct after he was asked to leave a St. Patrick's Day party. Six Penn State players are currently suspended from the team pending the outcome of various off-the-field incidents.

Last October, Paterno was involved in an incident described as road rage. The incident was first reported on Blue White Illustrated, the Penn State Rivals board, and quickly spread through the blogosphere before being picked up by the mainstream media.

Paterno eventually acknowledged there was an incident and blamed the messengers, saying he "did not give [the other driver] the middle finger, even if I knew what that meant."

Purdue's Joe Tiller, who is retiring at the end of the 2008 season, added to the speculation earlier this month when he acknowledged recently talking retirement with Paterno.
Posted by dawizofodds at 4:37 AM