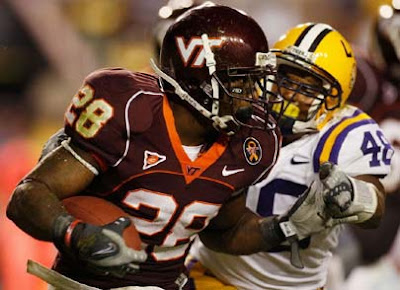 Branden Ore, Virginia Tech's leading rusher the past two seasons who was entering his final season of eligibility, has been kicked off the team by Frank Beamer.

It's unclear exactly what Ore did to get booted, but he has had a series of academic and off-the-field troubles.

In 2006, coaches told Ore to spend the spring semester at home to rehab from shoulder surgery and refocus on academics. According to the Richmond Times-Dispatch, Ore spent the semester working at a 7-Eleven warehouse.

Ore was so out of shape when camp started last fall that he was demoted to third team. Then he was late for one of the Hokies' bowl practices and was penalized by being suspended for the first quarter of the Orange Bowl, which the Hokies lost to Kansas, 24-21.

Later in January, Ore testified in a year-old federal drug case. A Cadillac driven by friend Tony Majette was pulled over in June 2006 in Blacksburg. A search found about 23 grams of crack in the car. Ore was in the front passenger seat.

The tailback testified that Majette handed him a bag of crack when the police ordered the driver to stop. Ore said he pushed the bag aside. Majette was convicted of possessing a controlled substance with intent to distribute.
Posted by dawizofodds at 3:20 AM