South Florida Can Be Tight With Money 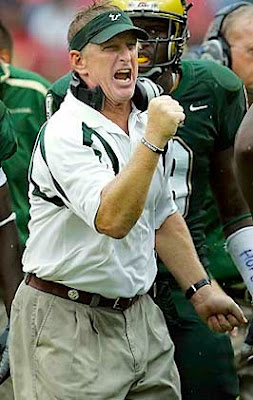 South Florida is either cheap or the model of efficiency. The 2007 staff of coach Jim Leavitt ranked near the bottom in pay among Bowl Championship Series teams, according to Brett McMurphy of the Tampa Tribune.

As a note of interested, South Florida athletic director Doug Woolard made $421,000, considerably higher than the Big East average of $362,683.

McMurphy's story has a pdf file that lists how South Florida, Florida State and Florida rank nationally compared to other conferences and also lists BCS highs and lows for assistant coaching positions, men's and women's basketball and athletic director salaries. You can also download the pdf file by clicking here.
Posted by dawizofodds at 4:28 PM