The Book on Nick Saban 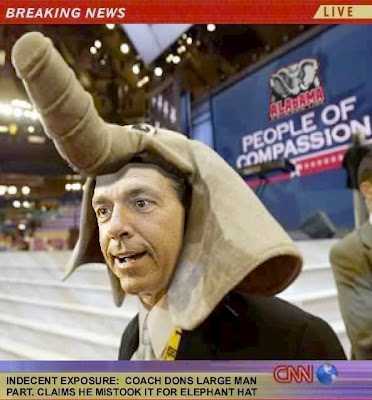 With no games to watch and spring football still weeks off in many parts of the country, bloggers have been getting caught up with their reading, including the book "How Good Do You Want to Be" by Nick Saban (with an assistant from Brian Curtis).

Mark Paden of The Auburner recently completed Saban's book and notes a passage where the Alabama coach talks about how a Little League coach should do "the right thing" and suspend his standout player who skipped practice to go to the mall. Of course, Saban did just the opposite last Nov. 17 when he lifted a one-game suspension to standout receiver DJ Hall at halftime of a crushing 21-14 loss to Louisiana Monroe.

Losers With Socks — "notice the forward by known cheater Bill Belichick ... Bama will be back on NCAA sanctions in no time" — has even more fun with this, rewriting a passage to 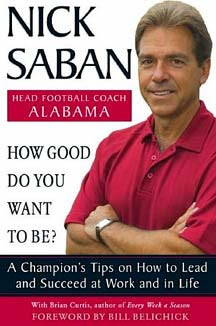 indicate what Saban was really thinking at halftime of the loss to the Warhawks:

"No one outside the team knows that DJ Hall was supposed to be suspended for the whole game, and if we put him in now maybe we can save some face. What do you do?

"At first, it seems clear that the right thing to do is to keep DJ Hall suspended for the whole game. You’re playing a f---ing Sun Belt school, no need to break the glass on the fire alarm just yet, right? But then you think about how important he is to the wide receiver corps. How John Sarah Jessica Parker Wilson counts on him for so much, as do you.

"You picture the embarrassing loss against a Sun Belt school that would completely de-justify your $4 million per season salary, the only thing you truly care about. No one would know, you tell yourself, unless the over-paid coach with the paid athletes can’t pull off the win against mighty Louisiana Monroe."

Saban is also catching hell in an excellent column by Ray Melick of the Birmingham News, who says the coach had no business signing 32 players earlier this month:

"That's seven over the NCAA maximum of 25 in any given year, and, at least at first glance, 17 over the number of scholarships the Tide would seem to have available for next year, based on losing 15 scholarship seniors from last year's team."
Posted by dawizofodds at 2:59 AM

"at least at first glance, 17 over the number of scholarships the Tide would seem to have available for next year, based on losing 15 scholarship seniors from last year's team."

i guess "at first glance" is the key phrase here b/c anyone who says/believes this is showing ignorance and a lack of research. i'm not even going to go in to all the details, but if one even paid a gnat's ass worth of attention to bama football you would know that at the VERY LEAST...3 scholarships have come available just in the last few days.

but of course saban is the anti christ blah blah blah.

He's Saint Nick. How dare anyone question his motives?

SEC schools sign over the limit all the time, it's been going on for years. I'm not a fan of Nick Saban, but whoever wrote that is awful ignorant of recruiting practices. The expectation is that a number of guys won't qualify academically or will have to go to community college etc., and will enter school with the next year's class.

Saban is using Bammer math on the scholarships, a lot like the way the Bammeroids count their 157 NCs

Saban has a book? Didn't know he was such a fan of fiction writing....

Blah, Blah, Blah! Get over it already. Long Snapperrrrrrrrr!

More Saban envy... never seen as much attention poured over a coach as you losers. Let's see how he does in 2009 and then judge him-- no excuses then. Really, how would you even get to this site unless you were some freak? I got here because some freak sent it to me.

Nick Saban does not have time for this shit.

My mamma said that little nicky is starting the "Cut the Seniors Process, except for John Jacob Jingleheimer Smith Sarah Jessica Parker Wilson"
So Signing 17 Over the limit of 85, is a Stupid comment? Really? The bammers have two or three coming in that count towards the '07 Class, so that's still (we'll say 14 over), now with the one being kicked out of school that's another (13 over)..Prince being kicked of the team that's another (12). A couple players are going to pay their way. That's still 10 over. So, who's going to not qualify? I've heard Star Jackson might not. So are there going to be More Arrests?

a year later, Saban has Alabama at 12-1 playing in the Sugar Bowl against Utah, while ranked at $4, as well as washing away every sec losing streak alabama has, other than two straight to Florida.

And you people questioned his practices???