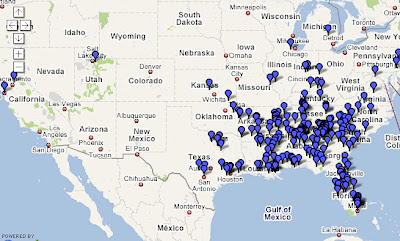 When it comes to examining recruiting data, nobody presents a visual representation like Map Game Day, which has posted its 2008 recruiting maps.

If you're not familiar with these maps, let us fill you in. Richard, who runs the site, has taken the lists of recruits from each I-A team and plugged the data into Google Maps. The lists come from each university, so they'll be no Kevin Hart showing up in this data.

His site allows you to customize maps of recruits by school, state

or conference. Corresponding tabs will be displayed on each Google Map and you'll be able to click a tab for more detailed information. There is a ton of information available once you dig into it.

As an example and for all of our friends in Southeastern Conference territory that we've been picking on, the map at the top of this post displays the hometowns of all the SEC recruits. It gives you a visual representation of how the recruits were clustered in the Southeast. 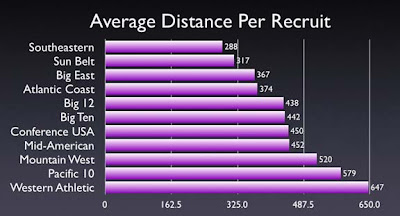 With Richard's help, we broke down some of the data. The chart above shows the average distance per recruit by conference. As you can see, SEC teams didn't have to go far to restock their rosters. Not the case in the Western Athletic Conference, where the average recruit came from 647 miles away. You can click any of these charts for a detailed look. 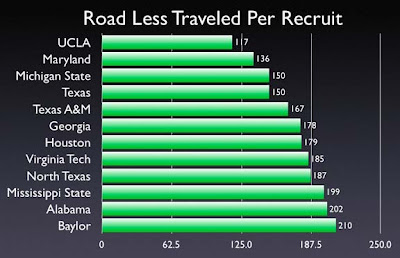 This chart shows teams whose recruits came from the closest distances. The average UCLA recruit came from only 117 miles away. Richard tells us that while 23% of the players from California stayed in the state, a whopping 43% of players from Texas didn't cross the border, which helps explain why five Texas teams show up in this chart. (That and the fact the state is so damn big.) Texas, for example, signed only one player from out of state and a check of the Longhorns' 2008 spring roster shows only seven players from outside the Longhorn State. 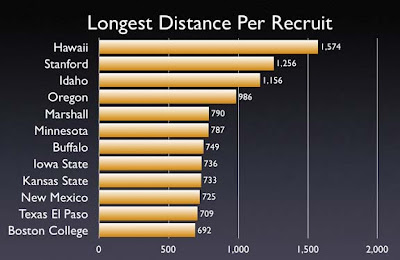 This chart shows teams whose recruits came from the greatest distances. Hawaii is the obvious winner. We also took note that Kansas State shows up on this chart. Interesting because the Wildcats recruited 19 junior college players.
Posted by dawizofodds at 4:15 AM

It's really an interesting site. Interesting to see all of the info. Truly is a great idea. I wish I would of thought of something like that.

of course, hawaii, being part of the wac kind of skews numbers too don't you think? what would the wac look like without hawaii as part of the formula?