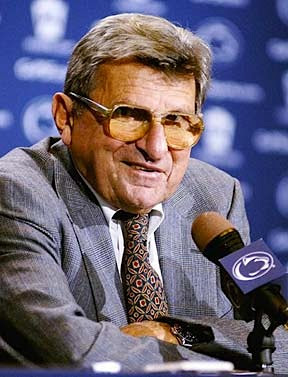 Penn State's Joe Paterno is entering the final season of his contract and, perhaps, his final season as coach.

University president Graham Spanier, who was recently awarded a five-year extension, was scheduled to meet with the 81-year-old coach after the Alamo Bowl, but Paterno came down with a debilitating two-week bout with influenza that effectively flattened him for much of the home stretch to signing day.

Another meeting was scheduled for last Wednesday, but that was postponed and only added to speculation that Spanier is in no rush to address the situation.

Trustees are also talking — off the record — about 2008 being Paterno's last season.

"He's always saying that this is what he likes to do, that he doesn't play golf or have any other hobbies," said one trustee. "Well, that isn't our problem. I think if he wasn't the coach, he'd still be as busy as ever. He could be a full-time fundraiser and really help the university."

Said another trustee: "We've asked the president to come up with a plan for after 2008. And I'm pretty sure the sentiment is [Paterno] shouldn't coach past 2008.

"Now, the question is, will Joe do the classy thing or will he fight it? I know he doesn't want to be paraded around. But you also have to remember his ego is as big as New Jersey."

The next trustees meeting is scheduled for March 20 in Washington, D.C.

Thanks to Kevin of We Are Penn State.
Posted by dawizofodds at 2:34 AM

Of course his ego is as big as New Jersey. It has to be to succeed at that level for as long as JoPa has. I'm not really sure wht the trustees are trying to back-room him off the sidelines though. PSU still has a nasty D, is in the Pryor sweepstakes, and there is no inclination that he's losing his ability to coach. Contrast that to Bowden who has effectively mailed it in the past five years. Leave Joe alone. He'll retire on his own terms.

"Now, the question is, will Joe do the classy thing or will he fight it? I know he doesn't want to be paraded around. But you also have to remember his ego is as big as New Jersey."


I think it is huge mistake for PSU to try to backdoor him out of there. He is the face of your program. If he wants to die on the sidelines of a game, in the 3rd quarter, let him.

And God bless him.

Wow, way to throw the old guy under the bus. I guess it wouldn't officially be the college off season without talking about Paterno retiring or fired.
The guy still has it, hell he still runs off the field, and gives officials more than an ear full.

Have some respect you greedy bastards.

Joe Pa is not just the face of PSU, for that matter face of college football...you are right bowden has mailed it in for 5yrs, joe might not know how to txt, but he sure as hell knows how to coach and still does. If the trustees would quit tryin to back door joe and let him do iton his schedule recruits wouldnt be weary of coming. when dean smith left unc they struggled for years, let joe decide when to give it up so we dont struggle...PSU would not be half the size that it is w/out joe he made us...give him some love and respect trustees...like we say in happy valley...WE ARE...now stand behind the man...

Joe Paterno has earned the right to make the decision on his term, and when it ends. There is no one on the Board that has given as much of themselves to the university, so a little presumptious to pass judgement. A succession plan is one thing to court the right person to succeed (not replace as that will never be possible), and Joe should be actively involved in that process. All PSU fans want another title...Big Ten and National - in fact we want it now and nothing would be sweeter than to win it with Joe - but he is still the only man for the job until he says otherwise. Personally meeting and engaging with a man, a legend, who has no ego that isn't completely warranted and no where near that of which is deserved. He is humble in comparison. Ticket sales, attendance, and ultimately financial gains are all prevalent at Penn State - so board of directors, question to you is what are you looking for? Cowher, or any other high profile successor will cost you much more than Joe - and you will need some one of high caliber to take be the next head coach. And keep in mind WE vote for you, so fully note my vote this coming year will be for new blood on the BOD as you have obviously let your power go to your head. GO JoePA! GO LIONS!

Joe has to go. The university will be in a lot more tougher situation if they let Joe's coaching career go on. But what really bothers me is the fact the psu had one of the worse recruiting years in a decade. Is Joe setting up the next head coach at psu..I HOPE NOT...GOD BLESS TOM BRADLEY...

Didn't Grambling force out Eddie Robinson? This thing with Joe is going to get UGLY. The time for change IS upon us though. It's time Joe, it's time.

Joe is getting beat in the recruiting, and that is killing the program. 4-4 in the now-weak BigTen? Let's get Greg Schiano. I don't want some oldster from the current staff with no head-coaching experience.
(PSU class of '85)