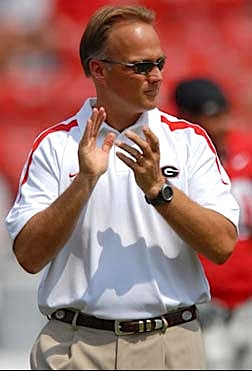 Most readers to this site were not even alive the last time Georgia traveled west the Central Time Zone for a game. The year was 1960 and the Bulldogs lost, 10-3, at USC.

Georgia has been hunkered down in the Deep South since. In the past 10 years, no team has traveled fewer miles for nonconference games than Georgia, which has covered only 358 miles in that time.

All that will end on Sept. 20, when Georgia travels to Tempe to play Arizona State.

John Walters of NBC Sports.com has a list of the top 25 nonconference matchups of 2008 and the Georgia-Arizona State game tops the list, getting the nod over Ohio State at USC on Sept. 13.

Other games of interest include Auburn at West Virginia and Tennessee at UCLA on Sept. 6, Arkansas at Texas on Sept. 13, Virginia Tech at Nebraska and West Virginia at Colorado on Sept. 27.
Posted by dawizofodds at 3:39 AM

USc plays ASU every year. Georgia does it in 2008 and all of a sudden its a top game of 2008? Geez. I guess anytime an SEC team travels out of state to play a nonconference game against a decent team it should be page 1 news.

The reason UGA has only traveled 350 something miles is because Atlanta (home of GA Tech) is only an hour from Athens. They can't help it their in state rival is right down the road.

you top my pist as biggest MORON on the board.

the blog was about, "TOP NONCONFERENCE GAMES OF 2008."

put your medicinal mary jane down and take time to read everyonce in awhile. RIF!

It must be because Georgia is leaving the South because Ohio St. at USC is clearly the better game. ASU just doesn't stand up compared to any combination of USC, Georgia and Ohio St.

lol...that lou guy sure is a darn idiot if I ever seen one. probably puts socks on backwards. heres one for ya... the Gators haven't left the whole state of Florida since 1991 to play an OOC game.
Florida don't like travelin north of the M-D line since gettin' spanked at Syracuse 38-21.

UGA can't help that GA Tech is only an hour away. But they do have the option of scheduling an occasional OOC road game in addition to Tech.

Here is the complete list of every OOC road game Georgia has played (outside of the GT series) in the last 20 years:

Other teams are hamstrung by OOC rivalries but still find time to play other road games.

For example, Iowa has to play at Iowa State every odd numbered year. Granted, ISU isn't traditionally as strong as GT. But Iowa has also played road games against the following teams over the past 20 years:

And, for the record, Ohio State-USC figures to be the best regular season game of the year, conference or non-conference.

Georgia-Arizona State is at best a distant second.