Jones Hitches His Ride to the Pony Express 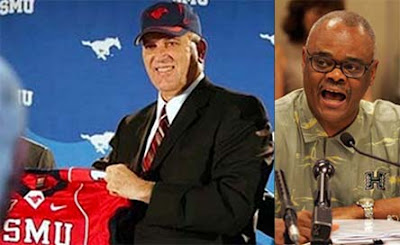 Deteriorating facilities at Hawaii became a centerpoint behind Jones' departure. The Honolulu Advertiser has a slideshow comparing facilities at SMU to those at Hawaii. You can also view video of Jones being introduced as Mustang coach by clicking here.

Who will replace Jones? Many names are being tossed about, including San Jose State's Dick Tomey, who used to coach at Hawaii, and New York Giants offensive coordinator Kevin Gilbride.

Back to SMU. It took 71 days for the Mustangs to find their coach, but getting Jones was well worth the wait, writes Jean-Jacques Taylor of the Dallas Morning News.
Posted by dawizofodds at 1:06 AM