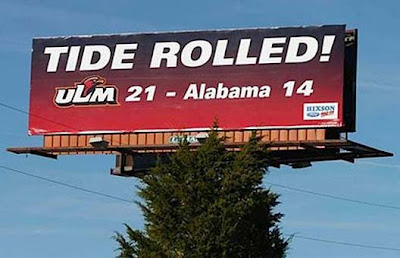 Alabama fans driving to the Independence Bowl in Shreveport along Interstate 20 might want to consider a detour. Hixson Ford of Monroe has put up this billboard at a cost of $12,000 to celebrate Louisiana Monroe's 21-14 victory over the Crimson Tide on Nov. 17.

That game, of course, was played in Bryant-Denny Stadium in Tuscaloosa because as we all know, Southeastern Conference teams don't like to play nonconference road games. The league schedule is just too damn demanding to allow it.

Oh, before we forget, the Crimson Tide got rolled by a so-so Florida State team in their only nonleague appearance on the road. Do we see a pattern here? SEC team plays nonconference game on the road. SEC team loses.

We thank Erik over at one of our favorite sites, Deep South Sports, for finding this billboard. And remember to look at our Billboard's Best contest from last offseason.
Posted by dawizofodds at 5:02 AM

first of all, the tide lost to fsu by 7 points, essentially one play, a blown coverage for 80 yards. not exactly "rolled" when you're kicking on onside kick at the end of the game with a chance to tie it. secondly, the 'noles finished with a better record than the tide, so maybe you called the wrong team "so-so."

Is this a joke? Perhaps you should increase your sample size beyond Alabama 2007 if you are going to impugn an entire conference.

For the record, no other conference has a comparable record away from home. Almost every other conference sits around .500, with the exception of the Big East, who is markedly worse. The SEC's winning percentage is .574.

"But, surely, the SEC plays bad teams outside the conference," you must be saying. Well, if you limit these numbers to games against BCS teams, the SEC is 37-39-1 on the road, and 55-41 at neutral sites.

And, rest assured, the further you go back in history, the more dominant the SEC is relative to other conferences.

Perhaps if you spent more time looking at the record book and a little less time trying to be snarky, you wouldn't make a fool out of yourself.

Da wiz has been disappointing me lately with his SEC hatred. Step it up!

So it has a winning record against one other BCS league in nonconference road games the past 10 years.

I love the SEC, but the numbers speak for themselves.

The SEC is not alone in this. Every other BCS conference is guilty, too.

As football fans, wouldn't you rather see quality intersectional games each week rather than a 45-14 blowout of directional state?

I'm already looking forward to Georgia at Arizona State and Ohio State at USC in 2008. Just imagine how great our game can be if nonconference games like this become the norm.

Given the rising cost of ticket prices and financial demands asked of fans, we have a right to ask for a quality product in return. Agree?

The reason teams schedule these weak OOC schedules is because you can NOT afford to lose a game most years if you want a crack at the national title.

The fact is that we reward weak schedules. Look at Hawaii. WTF are they doing in a BCS bowl with a schedule like that? Who cares if they are undefeated?

If we ever move to a playoff, I think you will start seeing better OOC scheduling. Until then, don't expect to see too many bigtime OOC games, especially when teams play very tough in conference schedules like the SEC. There is ZERO incentive to schedule tough ones on the road. What do you get? A few bumps in the rankings? Pshh.. beat a few patsies and you'll be there anyways... without the risk.

But those records you are posting don't hold any weight, sorry.

Then you can have a conference argument. Until then, the whole record thing is stupid and is just another way for the SEC haters to throw baseless stats out there.

So what you are telling me is you are satisfied watching Alabama play and lose to Louisiana Monroe instead of watching the Crimson Tide play, say, Texas?

What we have in place is a political system. We need a points system. If you like politics, the system we have is fine for you.

Ohio State and LSU each played one nonconference game against another BCS team. That's laughable.

I disagree again. Being in a BCS conference doesn't mean you are better than a non-BCS school. Why would you give a school twice as many "points" for beating Duke than you would for beating, say, Hawaii? That doesn't make much sense.

But it sounds like you have a problem with the system. If that's the case, perhaps you should write about how you dislike that instead of bashing the SEC. If teams weren't punished so much for early season losses, then maybe you'd see Alabama flying across the country to play an OOC game. But again, what incentive do they have? None. They will be rewarded the same if they play ULM at home.

First off, my apologies if my original post was harshly worded. Believe me, it was a reaction to your usual even-handedness than anything else.

That said, the clear implication of your post was that SEC teams don't play road games because they lose when they do. I suppose that's true--after all, BCS teams only win something like 40% of the time when they go on the road against other BCS teams--but they lose considerably less often than other conferences do.

In any event, post titles like "More evidence of SEC fraud" do not suggest that you are calling out all of college football for scheduling hijinx.

(And, by the way, the neutral-site information was included because the 'Bama-FSU match was a neutral site match, if I'm not mistaken--I may be, perhaps there is a return leg for Birmingham in the future.)

Let's talk money (or the bcs)! the sec is 11-4 in bcs bowl games (9 of their last 10 appearances). that speaks for itself. not to mention the conference is undefeated in the national championship game (4-0). That gives the best conference in the land a 2-championship lead over the contenders. Everybody else in the country plays football, but the south lives it! We understand
people will hate. Southern Cal is the only team that could survive an sec schedule - for everyone else you better hope you schedule an sec bottom feeder or else you will pay the fare just like the buckeyes have down the last nine times