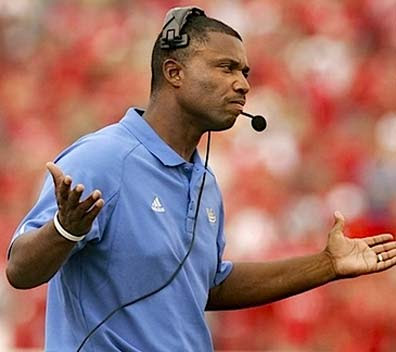 That's a picture of UCLA interim head coach DeWayne Walker. His players spent a good part of the week preparing for the Las Vegas Bowl at the craps table in the Venetian, giving their money away and trying to drink back their losses. For this, he might be the next Bruin coach.

Why? Because Bronco Mendenhall is coach of Brigham Young. Mendenhall brought back memories of Joe Pisarcik during Saturday night's Las Vegas Bowl. Instead of having his quarterback take a knee and head to the halftime with a 17-6 lead, the Cougar coach decided to try a running play that resulted in a fumble, giving UCLA life and, moments later a touchdown and 17-12 deficit.

Walker had a chance at that point to show he had what it takes to be a head coach. But instead of going for two, he kicked the extra point and went to the break trailing, 17-13. That would prove to be decisive, as the offensively challenged Bruins lost, 17-16.

And we're playing coaches millions of dollars to make these boneheaded decisions? Where does one sign up?

That brings us back to UCLA's search for a coach. T.J. Simers of the L.A. Times has this one nailed. Bruin athletic director Dan Guerrero hasn't a clue, folks, and the bumbling Bruins will likely name either Walker, Rick Neuheisel or Al Golden as coach. The smart money is on Neuheisel, according to Simers:

"The way the story is told, Neuheisel met with the UCLA chancellor and told him he would keep Walker, hire Norm Chow and he would have one of his former fraternity brothers, who is rich now, pay for their salaries.

"He also said he could produce four different donors, each giving $1 million for the Pauley Pavilion makeover, and no question, 'Slick Rick' still has it."

So there you have it. It has come to this. The UCLA coaching search.
Posted by dawizofodds at 3:38 AM

Great blog, bad post. Going for two in the first half is never a good idea. Never. No amount of Monday morning quarterbacking will change that.
If UCLA can block for its kicker they win - it's as simple as that.

what they said. how about scoring more than 3 points in the second half???

The previous have said it well, horrible post, especially considering how high quality your posts usualy are, I guess everyone deserves a off day. I ask you this, if UCLA had gone for two and missed, than made that FG like they should have than lost in OT would you still say good idea to go for two? There are way to many ways a football score can shake out to got for 40% chance of two when you can have a 99.9999999% chance of 1 in the first half.