Biggest Salary Is Off Federal Books 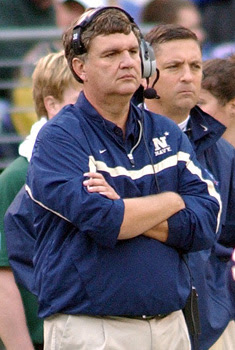 The highest-paid employee in the federal government announced Friday that he was leaving his job. Paul Johnson, who was paid $1.1 million a year to coach football at Navy, is now calling the shots at Georgia Tech.

Talk about Commander in Chief. President George W. Bush is paid $400,000 a year.

Johnson worked miracles at Navy. His beat Army six years in a row and teams led the nation in rushing for the past three seasons. He took a bunch of scrappy linemen who were giving up 40-50 pounds a man and beat Crewcut Charlie Weis and his roster of blue-chip talent at Notre Dame. Imagine the success Navy would have had with a defense.

Georgia Tech made a helluva hire, and Johnson comes at a rock-bottom price of $11 million over seven seasons — a bargain considering the obscene salaries being tossed around this offseason. We ask, could Nick Saban or Les Miles accomplish what Johnson did at Navy? Seriously.

Take it from somebody who knows. Bobby Ross won a national championship at Georgia Tech and coached three years at Army.

"He's just a sharp football coach," Ross said. "He knows the game well and he knows what it takes to win."

In other coaching-related news:

Michigan: Regrouping after Greg Schiano reportedly turned down a $2.2 million a year offer, despite the fact that Rutgers' Board of Governors just declined to vote on a proposed $102 million expansion to Rutgers' 44,000-seat stadium. Maybe it's all good for the Wolverines. Ian O'Conner of the Hackensack Record says Schiano is just another bad Jersey joke and the coach wanted to show Governor John Corzine that Bruce Springsteen isn't the only boss in the Garden State.

Southern Mississippi: Arkansas offensive coordinator David Lee has withdrawn from consideration.
Posted by dawizofodds at 2:31 AM