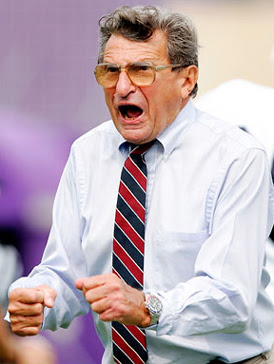 According to Black Shoe Diaries and Fan Blogs, Penn State coach Joe Paterno is being investigated for a road rage incident last Friday and the matter has been turned over to university police.

An account of the incident first appeared Saturday on Blue White Illustrated, the Penn State Rivals board:

"Yesterday, two grad students [husband and wife] that I know were driving on campus and being followed closely by a white car. The white car passes them and then cuts them off and pins them against the curb.

"The woman is so shaken up that the police ask here [sic] if she's OK to drive. The only thing they can think of that set the driver of the white car off was if they were driving too slow. They were both in some state of shock the rest of the day that Joe Paterno, a man they both admired, could act this way.

"If this is the way our 80 yr. old head coach acts....can we be shocked our team captains act the way they do?"

The Centre Daily Times reports Tuesday that officials are investigating an apparent road rage incident, but that the names of those involved could not be released because the investigation is ongoing. Sports By Brooks is also on the case.

Thanks to the Midwest Correspondent.

Update: Transcript of Paterno's Tuesday press conference has been posted. He was not specifically asked about the incident. Here is one exchange that appears to reference the incident:

Question: I was going to ask you — it's got to the point now because of the progression of that things have happened, the speculation gets louder and crazier; there was speculation that you might have been involved, can you clarify on that?

And later this exchange:

Paterno: Is it my leadership?

Question: Well, I guess you and the players.

Paterno: Obviously when you talk about leadership, I would hope that we would go from me down, or up I guess.
Posted by dawizofodds at 11:16 AM

Can't you guys get both sides of the story before you accuse someone of something? The woman ran a stop sign and then claims Joe has road rage. I'm sure she was sooo upset the officer had to ask if she would be able to drive. Her husband was with her-he could've driven her through another stop sign.

What side of the story do you want? The side YOU want to believe? Who are you, anyway?

Yeah, those grad students probably did their undergrad at OSU and decided to make up this BS story