Dennis Franchione Is a Liar 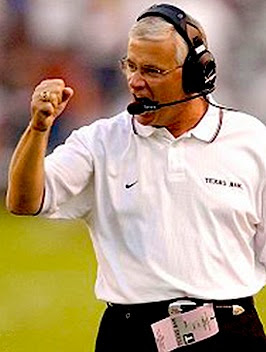 The bullshit meter went off on this one. With his team having just scored a touchdown to build its lead to 36-14 against Nebraska with 4:32 remaining last Saturday at Lincoln, Texas A&M's Dennis Franchione decided it was time to go for two.

The attempt was unsuccessful, but when Mr. VIP Connections strutted into his press conference Tuesday, he came prepared. Franchione threw a small laminated card at reporters that tells coaches when to attempt a two-point conversion:

Now let us go back to Sept. 3, 2005. Franchione's team had just scored to take a 23-22 lead at Clemson with 9:22 remaining. So what does he do? Kick the extra point, of course. And what happens? Clemson marches down the field and Richie Bean kicks a field goal — his sixth — to give the Tigers a 25-24 victory.

Where was the laminated card that day, coach?
Posted by dawizofodds at 2:05 AM

Wait... So, he screwed up and made a wrong decision 2 years ago, and lost a game because of it (something no coach takes lightly).

Now he follows the Gofer2 card.

Why is that "lying"?

(I have no fan-based interest in Texas football, BTW. My brother-in-law roots for Texas. A friend's wife went to A&M, I think. I'm a Florida guy, and Franchione sounds like a moron, from recent news reports. I'm just trying to understand why this is "lying.")

I don't think Franchione is lying, I just think he's a fucking idiot.

Franchione decided it was time to go for two. Cornhusker fans went berserk.

Please note that it's Franchione's job to put as many points on your ass as he can. Please also note that it's up to your Pourous Shirts defense to stop him from doing so. And in this one situation, they got the job done.

Is the same Nebraska program that used to get fat off rolling up big scores against clearly outmanned teams in the Osborne era?

I'm sure the Husker fans were all up in arms about these games. And I left off a whole bunch of games where Nebraska scored 60+ points.

Hey, I knew some guys who played in that '83 Minnesota game. They said they started making up plays in the huddle and whatever they did worked.

It was also an away game so they could only take 60 guys.

Cornhusker fans went beserk there was no need to do a two-point conversion at that point. It's just stupid football, but then that explains Dennis Franchione doesn't it?