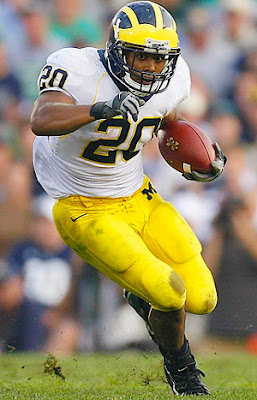 They are not about to forget Jim Harbaugh for the swipe he took three months ago at his former school.

"He's not a Michigan man," Wolverine running back Mike Hart, right, told Angelique S. Chengelis of the Detroit News. "I wish he had never played here, but it is what it is."

Harbaugh, in his first year as Stanford coach, told the San Francisco Chronicle in May: "Michigan is a good school and I got a good education there, but the athletic department has ways to get borderline guys in, and when they're in, they steer them to courses in sports communications. They're adulated when they're playing, but when they get out, the people who adulated them won't hire them."

Jamie Morris, one of Harbaugh's teammates, used to consider the former quarterback a close friend. Today, they no longer speak.

Morris, who works in the Michigan athletic development department, said he talked to Harbaugh shortly after the comments were printed.

"I said, 'Jim, here's my question for you — do you really believe the comments you said, or are you saying them to make you look good?'

Then it became heated.

And THAT is everything that's wrong with American college sports culture...

I missed whats wrong about cutting ties with a self promoting douchebag that tosses the University and people that helped build his career under the bus because it furthers his agenda. Harbaugh should probably be selling used cars on some long forgotten interstate, instead he's the Head Football coach for Stanford and he has his experience and education at Michigan to thank for that. Harbaugh forgot where he came from, and thats whats really wrong with American Culture.

There is nothing wrong with Harbaugh's comments unless they are certifiably false. Interesting, the Michigan people do not attempt to refute the facts, just the messenger.

I agree. I can't comment on what goes on at Michigan becuase I don't know, but it's no secret that some some schools give preference to athletes. It's impossible that this doesn't happen at all. At least one place has done it once.

The comments weren't very smart because when you attack Michigan without proof, you're pissing off the largest alumni base in the nation.

But I think Harbuagh is getting a raw deal here

Sounds like the man (Jim) is just speaking the truth. There is no debate that institutions distinctly lower their standards to admit top-flight recruits. The truths, the truth, no matter the source. (see Jose C.)

All big-time schools push athletes into easier majors. Carr, etc are peeved because Harbaugh's comments are being used by other schools to negatively recruit Michigan, because Harbaugh only singled out one school in what he said.

If Morris' comments are correct and Harbaugh would have kept his mouth shut if Bo Schembechler was still alive, well, that speaks volumes about Harbaugh's "courage".

College is not life. To break off a friendship over an opinion about an athletics program is moronic.

AND I'M TALKING AS A SPORTSFAN...

but come on... get some priorities here

- Michigan does not accept partial qualifiers like many many many D1 schools.

- Even comparing to BCS schools, they are in the Big 10 here...not the SEC, the Big 10 has academic standards.

- Who is taking transfers leaving Michigan this year? Why that would be Stanford = Jason Forcier

- We all know Harbaugh is all wise with his judgements and comments See = Comments on Pete Carrol, and his DUI conviction.

The point here is, a Michigan man is loyal through and through, Harbaugh's comments were both false and against the Champions and Best.

We are talking about Michigan athletics here right? Boosterism is rampant (see Chris Webber-Ed Martin, and let's not forget to remember all those players you see 'round campus that allegedly 'bought' those spankin' new Lincoln Navigators), its a place where you can recruit a player who is functionally illiterate but that won't stop them from plugging them in at linebacker, the same as just about every other major college program) and its a place where the graduation success rates for their football players is, according to Scout.com for 2006, 68%, well below the university at large. (Notre Dame's graduation success rate was the highest in 'major college football' at 96%).

I mean, is there something I missed? Or do football players, generally need a lower bar to get into most college programs, require a lot of coddling to get still low graduation success rates and where graft and boosterism is rife? Does Michigan (especially in earlier days) not fit this bill pretty much to a T????

But he has a Michigan education, doesn't he?

I can't believe the idiocracy I read here. I surely hope it's Michigan jealously and not an actual indication of intelligence.

The problems with Harbaugh's comments are two-fold. First, if he's truly a Michigan man he would not have ever made comments detrimental to the Michigan football problem ("Fredo I love you, but don't ever take sides against the family again"). Second, he singled out Michigan when they are so far from the problem.

I'm guessing Michigan is in the top 20 of Division 1 football schools when you look at objective criteria like graduation rates. Do they take people who wouldn't qualify if they didn't play football? Yes. And Duke did that with a HS friend who ran cross country. ALL schools do that. Do they try to get athletes into majors they can pass? Sure, but why wouldn't they. Hell, I might have wanted to be a brain surgeon but I would hope a counsellor would talk me out of it and direct to a major I could comprehend.

The issue is pure and simple - Harbaugh is a douchebag. He's trying to make a name for himself and his school and he's doing at the potential expense of Michigan. If he really cared about academic standards there are at least 80 other schools he could have chosen with extremely worse standards than Michigan.

Pathetic. Harbaugh is a bit annoying and a self-promoter, and he is outspoken- but if his comments were inaccurate, refute them- and if they were accurate, apologize to him. This is scary tribalism.

Old ND players always opine, often critically, on ND- Hornung made his racist comment, Aaron Taylor said ND was racist for firing Failingham- and they're still in the family.

Oh, speaking of that- new ND DC Corwin Brown, a former Michigan standout, told a recruit that if ND had offered, he'd have gone there instead. He got the recruit. Has Michigan disowned him yet?

Yes, because Harbaugh's accusations that includes no examples or names can be easily refuted or confirmed. Come on, you're better than that (I hope).

It's the fact that Harbaugh is leveling charges without offering proof that is why there's outrage. It's not tribalism (see - Chris Webber's disowning by the Michigan faithful).

"We're not friends anymore"? Are you serious?

Did he really say that?

Is Morris back in preschool?


Next, Morris is going to say that Harbaugh is officially on his enemy list for stealing his "favorite GI Joe".

Fact: UM graduates 38% of its african-american players. That's pretty bad... if not atrocious! Why doesn't UM address this instead of attacking Harbaugh? He is making constructive criticism, and yet UM doesn't get it. UM Class of '84

Put it this way, some of those not-so-smart players could gain an opportunity to make great money in the NFL, colleges give them major exposure to their prospective employers. Some of those players are not at college to become an accountant, lawyer, doctor, etc. Their profession is as a football player.

Ask that kid with the poor GPA, who can run like the wind, if he cares that he was coaxed into taking a sports communication class. What was his other option? Community college, working at T-Bell for change? Give me a scholarship and a degree from UofM. I would take that over 4 years of drive-thru orders.

I’m not saying that a college should not be educating all of its students to the best of its ability, but they are giving those kids an opportunity. Those kids choose their classes and are partially responsible for the education they receive.

As for Harbaugh’s comments. They were pointed directly at Michigan and nowhere else. He was making those comments to influence future recruiting, not because he thinks it’s an issue. This problem, if you think it’s a problem, probably exists in all of college sports.

Ask yourself? Why didn’t Harbaugh quit the program? Why did he stay at a college that condoned that kind of behavior? Probably because he had a lot to lose at the time. People with morals stand-up for what they believe in, especially when they have a lot to lose. A coward waits until he graduates, furthers his career, waits until a well respected man passes away, and then trash talks the college program that helped provide him with that success. Just to further his career more!

Finally, I agree with Morris’. Good for him. Those comments hurt the reputation of his coach and the players who played with him. Coming out and nationally broadcasting that the program you played for was immoral, just to further your own career, would end a friendship for me too.

In response to the questions from the Michigan folks as to why Harbaugh singled out Michigan ("Michigan is not the worst culprit," etc., etc.), the answer is obvious. Michigan is Harbaugh's alma mater, and he considers it a strong academic institution -- and rightly so. As he said to ESPN's Forde, at Stanford, he's now seen what it really means to apply high academic standards (standards much higher than those at Michigan) consistently across every one of your athletic recruits. He's now wondering why the institution of which he is otherwise proud, Michigan, can't take the same approach. He's challenging Michigan -- and every other big-time college athletic program at schools with high academic standards (these would include Cal, UCLA, Duke, Notre Dame, and the like) -- to take Stanford's approach, because it's the right thing to do for the student-athletes. And, of course, by making that challenge, he's calling attention to singularly unique approach at Stanford and inviting every high school football player that actually cares about his education to give Stanford a look.

Morris doesn't make any sense at all. Sure he's got a good job, but I wonder about all the other "student" athletes who came through Michigan. Do they have jobs? Or is it as Harbaugh said? Lets see some follow-up and research. As another commenter has said, I don't see anyone challenging WHAT HE SAID. Little 10 indeed.