Bill of Rights for Buckeye Nation 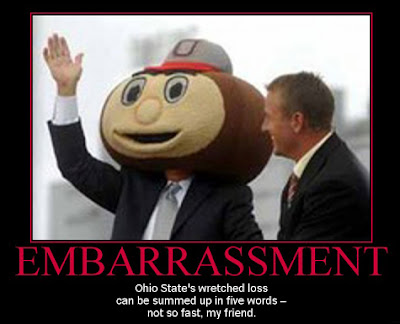 First a humbling loss to Florida in the BCS title game, now this. An Ohio State fan is upset over the Buckeyes' cupcake schedule. Ohio State's cushy road to an 8-0 start begins Sept. 1 at home against Youngstown State (Jim Tressel's former team), followed by a game at the Shoe against Akron. And don't forget that midseason breather against Kent. It can be argued the Buckeyes' first meaningful game will come Oct. 27 at Penn State.

Erik Johns, writing for The Other Paper, Columbus' News & Entertainment Weekly, says the lame schedule shows the need for a new set of rules. Thus, the Bill of Rights for the Buckeye Nation. Among the highlights:

Article I: "The athletic department shall not allow a game against any opponent from a Division I-AA school, regardless of whether the current coach used to work there ... If the coach wants to pay tribute to his former team from a lesser division, he can write a check to the university and leave it at that."

Article II: "The team shall not schedule more than one game per season with an in-state 'rival.' "

Article III: "With the exception of the one in-state game, all other non-conference games shall be played against teams from the SEC, Big 12, Big East, ACC or Pac-10. Notre Dame will be considered for regular-season scheduling once it wins a bowl game."

Article VIII: "After beating up on a hapless squad from the MAC or one of the service academies, the coaches and players shall not make embarrassing post-game comments such as praising the opponents’ toughness or crediting them for 'playing hard for 60 full minutes.' There’s a way to be honest about the quality of your opponents without insulting them."

Article X: "Membership in the Big Ten Conference alone is not sufficient reason for a team to earn praise from the Ohio State coaches and players. Indiana, Illinois, Northwestern and Minnesota suck. Stop talking about that noon game in Bloomington like it’s the Rose Bowl."

Thanks to Eleven Warriors.
Posted by dawizofodds at 3:39 AM