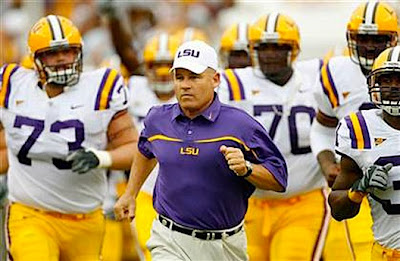 Who is next in line to coach Michigan? It could be none other than Les Miles, the Louisiana State coach who appeared to damage some relationships last week with his comments about — among other things — voting Florida over Michigan in the USA Today poll after the Gators defeated Arkansas in the Southeastern Conference title game.

That vote helped to put Florida in the BCS title game over Michigan, which is where Miles played and later served as an assistant under Bo Schembechler.

Speculation continues to build that Wolverine coach Lloyd Carr will retire at season's end. In January, officials made a change in Carr's contract that has helped lead to reasoning that the coach, who turns 62 on July 30, will call it quits.

Previously Carr was promised a $300,000 bonus if he were employed as Michigan's coach on July 1, 2008. The new contract promises the bonus to Carr if he is employed by the university in any capacity until July 1. Again, in any capacity, meaning he doesn't have to be coach.

Jim Carty of the Ann Arbor News believes Miles has a better chance than most candidates to replace Carr. He writes:

"Miles has the resume — having thrived at both Oklahoma State and LSU — plus he's charismatic and is typically given rave reviews by former players, assistant coaches, and the people he's worked for. You add those qualities to top-notch recruiting, a stint in the NFL and his Michigan ties [former player and assistant coach], and there's a lot to like."

It could help that Miles had maintained a relationship with Schembechler, who died Nov. 17. Carty writes:

"There are still rumors kicking around that Schembechler and Miles had grown apart in recent years over some LSU vs. Michigan recruiting nonsense, but both men dismissed that in separate conversations about their relationship last July. Bo said he watched every game Miles coached in his first season at LSU; Miles talked about how he still called his old coach for advice."
Posted by dawizofodds at 12:44 AM

but why in the Hell would you leave LSU for Michigan? I understand that he played there and such, but still. LSU is in its prime right now with athletes galore in what is without a doubt the class of college football. And by his comments from 2 weeks ago, Les believes he's in the best conference as well.

I don't remember the details and it might take me a while to find them online, Wiz you might be able to find them quicker than I can, but Miles has a clause in his contract against a move to Michigan. I cannot remember if he just cannot outright go for a certain time period or if the buyout is very extreme (4-5 million), but it is something that would likely prevent him from every going to michigan.

My mistake, the cost for him to go to michigan would be 1.25 million. Still pretty steep for a buyout, but not near what I had posted earlier.

Nice work hunting that down, Bailey!

Actually the UM buyout is in his contract in case the job would ever open up. 1.25 million is cheap for the UM athletic department. They paid a 1.5 buyout for the new basketball coach.

Sorry, it is not so he can go to UM but regardless UM can easily afford the buyout.

"Actually the UM buyout is in his contract in case the job would ever open up. 1.25 million is cheap for the UM athletic department. They paid a 1.5 buyout for the new basketball coach."

Actually, Beilein had to pay his own buyout...500,000 per year spread out over 3 years. UM is traditionally tight with it's funds, but they'll pay 1.25 million for the football program to succeed.