Why Crewcut Is in a Pickle Over Clausen 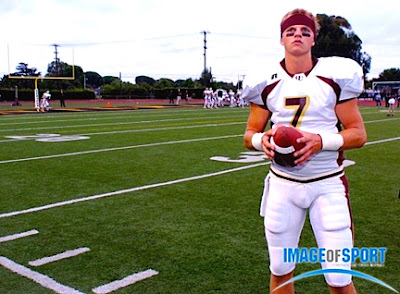 Notre Dame officials fessed up Wednesday and acknowledged that quarterback Jimmy Clausen had a "procedure" on an elbow, although they didn't say which elbow it was. The likely truth is that Clausen, the most celebrated recruit to arrive in South Bend since Ron Powlus, had surgery on his right throwing elbow, first reported by the site Log's Blog.

Thus the question: Why did Notre Dame hide the fact that Clausen had surgery?

Put yourself in the position of Notre Dame coach Crewcut Charlie Weis. Simply put, he doesn't want opponents to know that his prized quarterback is coming off surgery on his throwing elbow. After all, knowing a quarterback has an issue with his throwing arm can change an entire defensive scheme. Weis is no dummy.

You can argue that Weis is looking out for the best interest of the kid and the team, or perhaps even himself. The risk in all of this is that when you are found to be covering up an injury or a surgery, your reputation and credibility suffers.

Weis made his philosophy clear during his spring press conference on March 21, a day after a Chicago Sun-Times report quoted Clausen's dad, Jim Clausen Sr., saying his son was injured. Weis was miffed when asked about Clausen and interrupted a reporter:

Question: "You say everyone is full to go, and last time we talked, you said Clausen ..."

So there you have it. Can you believe anything Weis says from now on?

Weis did not make Clausen available to the media during spring practice, so we have yet to hear the quarterback's side of the story.

One last note: We'd like to mention John Walters of NBC Sports.com, who did what all journalists should be doing and properly credited Log's Blog for breaking the story. As for those who didn't extend the same professional courtesy, your credibility — much like Weis' — has been tarnished.

Thanks to Image of Sport.
Posted by dawizofodds at 3:10 AM

So let me get this straight. In March Clausen was deemed full go, participated in spring practice, received an equal number of snaps as the other three quarterbacks, and "threw the ball the best." If he was truly injured back then I doubt he would have been in practice. And now two months later he has a procedure.

And because that sequence of events we're not supposed to believe anything Weis says from now on? Quite a jump there, Wiz. I don't think you're in danger of having any mainstream media quote your blog any time soon.

I have to agree with the previous comment. If someone participates spring practice, how is "full to go" not accurate?

Surgery to clean out bone spurs is not a major procedure. Clausen will likely be READY to start the season. Whether he will actually win the job is another question.

General consensus from the ND community seems to be he would not start the season, but would have a chance to take over at some point in the year.

Weis lied, plain and simple. And no, I don't believe that means he's now lying all the time, but it does show that he's not above it.

How did he lie?

He said Clausen was full to go for spring practice. Clausen participated fully in spring drills. Both throwing and conditioning.

I don't see even a kernel of untruth in that statement.

Let's cut the crap, what the Wiz was trying to say is Weis is a fat pile of crap plain and simple. Lair or not.

As much as I dislike Weis and ND. I can't fault him for this one. Any coach worth his salt would have done the same thing, for reasons stated in the post. No one heard anything about Matt Leinart or Josh Heuple's problems until after the season was over.

Weis says "he's full to go." After which time Clausen fully participates in all the Spring practices and plays his full allotment of snaps in the Spring game. He then gets scoped, and will likely be back for the start of Fall camp. Maybe, maybe, m-a-y-b-e if he misses practice time come August you could argue that Charlie fibbed. But I don't think so. I think the Wiz has it out for CW and JC for some reason, though I have no idea why.

Are we supposed to be proud this story was broken by bloggers? These guys say they're ND fans, but they are probably doing much more to hurt their team (ie. forcing Weis hand and making him look bad) than to promote it.

I'm sorry, but this is just not going to do any good between the relationship between bloggers and the various sports information departments around the country. Some of us work very hard to promote the programs we cover by gaining the trust of players and people around the program and when something like this happens it gives all of us a bad name. I know breaking stories like this is all the rage for journalists trying to get attention, but I guess I’m in the minority when I feel that there are other ways to gain credibility without pissing your SID off.

Just peruse the archives of this blog and you'll see that the Wiz has a long and consistent history of jumping the gun to paint Weis in the most negative light possible (and thankfully is often called on it in his comment section.) I wonder if in the interest of full disclosure the Wiz shouldn't remind us of his football allegiances. In the absence of this disclosure, I will simply assume that the Wiz is a liar fabricating negative hackjobs on Charlie Weis because he is associated with a rival program. There's not a shred of evidence to prove this and it's totally irresponsible to write it, but I think that's about par for the course in terms of intellectual honesty for this blog.

The ND official said Clausen will be good to go for fall practice. Your source said he would be out for the season. Whose credibility has been tarnished, Wiz?