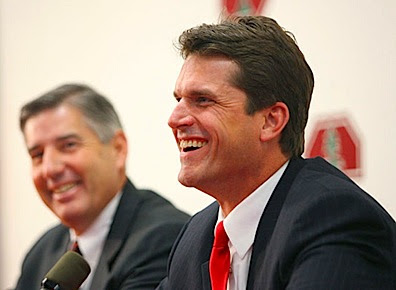 Jim Harbaugh is at it again. Harbaugh, the Stanford coach who recently engaged in a pissing match with USC's Pete Carroll, had unkind words for alma mater, Michigan.

Harbaugh was asked by the San Francisco Examiner's Glenn Dickey about Stanford's admission's standards, the nation's highest for a Division I-A team.

"College football needs Stanford," he said. "We're looking not for student-athletes but scholar-athletes. No other school can carry this banner. The Ivy League schools don't have enough weight [because of their low athletic level]. Other schools which have good academic reputations have ways to get borderline athletes in and keep them in."

Then Harbaugh unloaded on Michigan.

"Michigan is a good school and I got a good education there," he said, "but the athletic department has ways to get borderline guys in and, when they're in, they steer them to courses in sports communications. They're adulated when they're playing, but when they get out, the people who adulated them won't hire them."
Posted by dawizofodds at 2:12 AM

He's got a point.