Times Must Be Tough in Lawrence 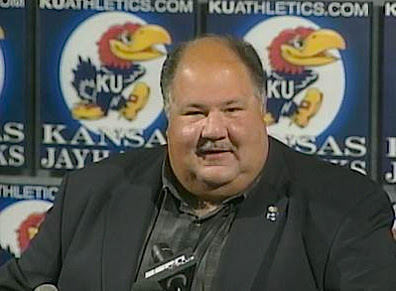 Somebody is allegedly forging checks belonging to Kansas coach Mark Mangino. The checks were taken March 30 from a vehicle belonging to Mangino that was parked outside a Subway restaurant in Lawrence.

Mangino's wife, Mary, told police that checks of $73.32 and $44.55 were forged between March 31 and April 10 at a Kwik Shop. In addition, police said three of Mangino's checks were written at Dillons stores in Lawrence on March 31 and April. 1. Those checks totaled about $34 each.

I don’t have any comment about it,” said Mangino, who signed a five-year contract in 2006 that will pay him at least $1.5 million per year.

Two Lawrence men were arrested on April 1 and charged in connection with several recent burglaries, including one to a vehicle belonging to Mangino. Police are not saying if the burglaries and forgeries are related.
Posted by dawizofodds at 3:57 AM

"The checks were taken March 30 from a vehicle belonging to Mangino that was parked outside a Subway restaurant in Lawrence."

You know that the parking lot at Big Bob's All-U-Can-Eat Buffet must have been full that day.

Hopefully, the culprits weren't members of the Jayhawks football team.