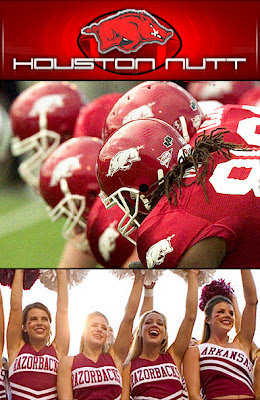 The latest bizarre twist at Arkansas: Diana Nutt, wife of coach Houston Nutt, reportedly has released a letter backing her husband, who has once again come under criticism after a 48-page analysis of Nutt's phone records was posted anonymously on the Internet.

The site Hogs, Hill SEC posted Diana Nutt's letter: "I have lost track of the false allegations against Houston and the number of resignation/firing deadlines that have come and gone. ... And no, Houston has not had an affair with [Fort Smith news anchor] Donna Bragg!"

The letter continues: "Houston has always been a man of very high morals and integrity. He has always been the best father and husband and has strong Christian values! I think it is pathetic that I am even having to address issues like this."

This latest flareup started last week after records obtained through a Freedom of Information Act request by citizen journalist Thomas McAfee became available on the Internet. McAfee, a Razorback fan who works in Little Rock for Alltell, has since tried to distance himself from any responsibility of the Internet posting and hired an attorney after receiving a second threatening letter from Nutt attorney Byron Freeman.

Nutt has not commented on the 48-page document, which quickly churned its way through the Internet. Much of the focus has been on Nutt's communication with Bragg, which included more than 1,000 calls and text messages between the parties in a two-month period. The most scrutinized text message is one Nutt sent to Bragg 27 minutes before kickoff of the Capital One Bowl between Arkansas and Wisconsin. The Razorbacks lost, 17-14.

"He has reasons to communicate with this woman and it’s no business of anyone else’s what those reasons are," Freeman said.

The Arkansas Times, which reported last week that university had since moved to shut down Freedom of Information access to athletic department phones by moving accounts to the private Razorback Foundation, now says that report was incorrect. "The records are not being moved, university officials said. The NCAA must be provided access to coaches’ phone records and text messages to enforce recruiting rules."

In other words, you have not heard the end of this.
Posted by dawizofodds at 12:32 AM

Maybe Nutt can route his cell phone through a Republican National Committee account to help avoid this embarassment. Oops, wait, that doesn't keep you out of hot water, either.