Nutt Again Under the Microscope 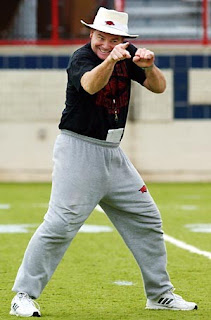 Arkansas coach Houston Nutt reportedly made inquiries about recent job openings at Miami and North Carolina State and was in frequent contact with Fort Smith news anchor Donna Bragg, according to a 48-page pdf document posted on the Internet.

Randy Rainwater of Little Rock radio station 103.7 The Buzz first reported the existence of the document during his "Drivetime Sports" show Wednesday. Word quickly spread. Among sites reporting details include the Arkansas Times, Journalism Is for Rockstars, EDSBS and LittleBlog. The document was first brought to our attention by Jeremie at 1430 The Buzz in Tulsa.

Thomas McAfee, described as "a concerned supporter of the Razorback athletic program," is reportedly behind the document, which contains information — mainly phone records and times and dates of text messages — obtained by Freedom of Information Act requests from the University of Arkansas.

Given the intensity of the anti-Nutt movement that has been chronicled here (search "Arkansas" at the top of our site), and the lack of independent confirmation of much of the material, we have merely linked to the often rambling document that also contains a threatening letter from a Little Rock attorney to McAfee. The university has since moved to shut down Freedom of Information access to athletic department phones by moving accounts to the private Razorback Foundation. The legality of this move is unclear, according to the Arkansas Times.

Incredible tale of a fan writing sarcastic letters to a Hog quarterback; Nutt's documented text messages/calls to other ADs and to a local news anchor; and some obsessive fan's relentless research. As sports fans we should step back from this bizarre tale to reflect on the role of intercollegiate athletics on college campuses. Is this what passes for 'higher learning' in Arkansas?

Even in the shit-storm that is Arkansas football, we Alabama fans can't escape Mike Price and his Destiny.