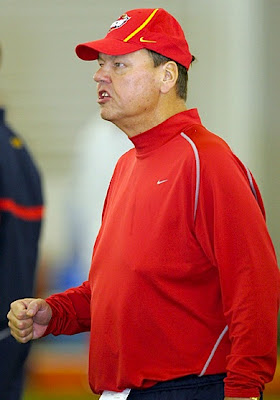 You would not recognize Iowa State defensive coordinator Wayne Bolt if you remember him from his days at Alabama Birmingham. Bolt announced this week he has lost an astounding 252 pounds in a year.

Bolt, 51, saw his weight balloon to 500 pounds. He wore a size 66 pant, size six extra-large shirt, had high blood pressure and diabetes. "I could barely move. I couldn't walk and everything hurt," he said. "I knew I had to do something about my weight."

Bolt decided to undergo gastric-bypass surgery, but at 500 pounds, he was too heavy for the procedure. 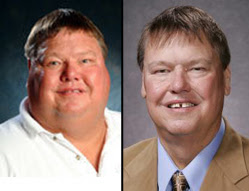 His doctor told him to lose 50 pounds beforehand. He lost 45 and had the procedure, which is similar to the "botched" surgery that has Notre Dame coach Crewcut Charlie Weis in litigation.

"Surgery is a tool. It’s only a tool," he said. "Some people try to tell me it’s a crutch for weight-loss. That’s not true. You have to want to do it. I can tell the kids I coach that they need to watch their weight, but in the end, they have to want to do something about it.”

Bolt is off all medications and although he still uses his sleep apnea machine, he hopes to discard it soon. "It's been a good run for me," he said. "I decided to get my life in order." Thanks to Steroid Nation. Top photo from ISU Athletics Communications.
Posted by dawizofodds at 2:32 AM

He should start coaching the ISU cheerleaders, they could learn a thing or too from this man!

haha, wow...whole-heartedly agree. how do they even do those flips?