Feat of Clay Another Embarrassing Incident 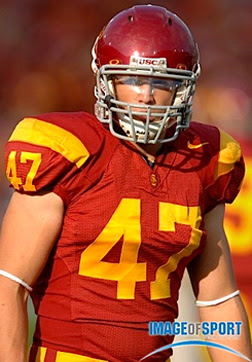 Was it a good-natured joke, as USC officials want you to believe, or is there racial tension in the nation's preeminent program?

USC linebacker Clay Matthews, left, was named as the person who created a racist Facebook group that featured a graphic of a black baby in handcuffs with the caption, "arrest black babies before they become criminals."

Facebook is a social networking website popular among college students, and the story about the racist site was first reported by Elizabeth Geli of the Daily Trojan. Teammates David Buehler, Brian Cushing, Dan Deckas and Dallas Sartz — all white — were named as members of the "White Nation" group.

At the very least, this is another embarrassing incident for USC football, which remains under a microscope for a series of off-field incidents, the most prominent being Reggie Bush's alleged involvement with a failed sports marketing firm.

When USC officials first learned about the site is unclear, but what is clear is that everybody had their stories straight when the press came calling, suggesting that officials have known about this for some time.

Joke or not, what we find disturbing is USC's response. Coach Pete Carroll told the L.A. Times that he had no plans to discipline the players. It's not as if this is the first time this has happened. Last year, a Times review of USC players with Facebook pages found some underage players holding what appeared to be alcoholic beverages. That should have been warning enough.

Also alarming is the response by many Trojan fans. The Daily Trojan story is littered with disturbing comments. "This is retared (sic) ... why even write an article about this," says a reader identified as Matt. "C'mon, are you serious? This is some self-righteous bull shitezah. Unnecessary pseudo-PC whistle-blowing." writes Erik Ta.

Yes, these people live among you.

Our thanks to Image of Sport for the shot of Matthews.
Posted by dawizofodds at 2:29 AM

Joke or not, what we find disturbing is USC's response. Coach Pete Carroll told the L.A. Times that he had no plans to discipline the players.

Sadly, this is par for the course for Pete "See No Evil" Carroll.