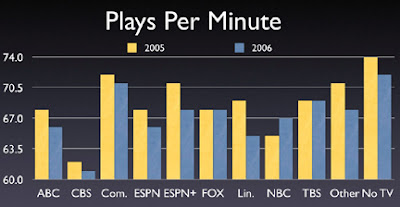 Yet another reason CBS telecasts dragged on and on in 2006: Games broadcast by the network were not only the longest in duration, they averaged the fewest plays per minute.

CBS games averaged only .61 plays a minute, a decline from .62 in 2005. These numbers are derived by taking the total length of broadcasts by a network and dividing it by the total number of rushing and passing plays. Kicking plays or plays nullified by penalty are not counted, which is the standard used to count plays by the NCAA. And yes, game duration includes halftime.

The biggest decline come from Lincoln Financial/Raycom telecasts, which dropped from .69 to .65. ESPN+ saw a decline from .71 to .68.

NBC, which lost 22 minutes off its average telecast in 2006, was the only network that saw its plays-per-minute average increase. NBC went from .65 to .67.

Again, we'd like to thank Marty from cfbstats.com, Matt from College Sports Schedules and Gary from Steroid Nation for supplying us with the figures.
Posted by dawizofodds at 2:28 AM

You should do an analysis of NFL games by way of comparison. I've always thought that college football, while imperfect, is far superior to the NFL in terms of plays versus commercials. I'd love to know if I'm right.