Who Takes Advantage of the System? 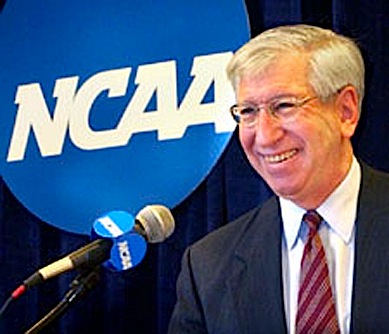 Something is seriously wrong here. As usual, we can't help but think about those fatcats running the NCAA, which has at least nine honchos pulling in more than a quarter-million a year, including president Myles Brand, above, who is compensated to the tune of $870,000-plus. On the other side we have Ramon McElrathbey, a 19-year-old cornerback at Clemson. McElrathbey, who has seven siblings ages 6 through 23, spent most of his childhood bouncing around foster homes. His mother, Tonya, said she has battled an addiction to crack cocaine for more than a decade. Tonya said McElrathbey's father has lived in Las Vegas the past three years and has a severe gambling problem. He has never seen his son play a down of football. Ramon, determined to do what is right to help his family, recently was granted temporary custody of his 11-year-old brother, Fahmarr. The two will be living together in an off-campus apartment, and last Friday Ramon took Fahmarr to his first day of classes at a local middle school. After the story was published by the Charleston Post and Courier, Clemson officials received an unrelenting deluge of calls and emails from fans asking how they could help. But because of NCAA rules that restrict the ability of college athletes to receive financial assistance from most of the outside world, Clemson is treading cautiously as it tries to navigate a complex situation that could end up in a violation of NCAA rules. Yes, something is wrong. Very wrong. ... Thanks to reader Dan for this.
Posted by dawizofodds at 3:13 AM

The rich get richer and Ramon McElrathbey gets exploited by the rich assholes.

what if McElrathbey wasn't a football player. There would be no newspaper article and little to no outside help. Not saying its right, just saying.

Thanks to your site, this has become an internet meme extraordinaire. It's now the cover of CNN's web site.