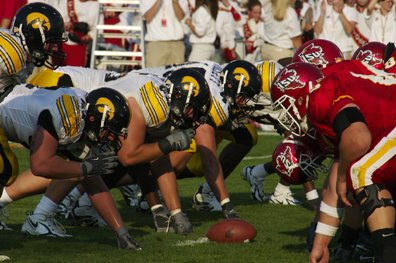 Count Scott Wolf, USC beat reporter for the Los Angeles Daily News, among the sharp-eyed reporters on top of the disastrous 3-2-5-e rule, which we have been harping about for the past few days. Wolf, in his blog, says the new rule is expected to shorten games by 10-12 minutes and knock 10-12 plays out of the game. The Wiz won't guesstimate how much time will be shaved from the length of a game, but he will challenge only 10-12 plays being lost. The argument we presented Saturday was actually a conservative estimate of 20 lost plays. For example, we cited seven kickoffs in our mock game. That would mean a game with five scores and the two kickoffs to start each half. Many games have 10 or more kickoffs. Now unless the networks are plotting to step in and insert commercial time between the kickoff and the next play from scrimmage (as is done for NFL games), each kickoff will result in the loss of one play under 3-2-5-e. ... We listed only eight punts in our mock game. Again, a very conservative estimate. Any game dominated by defenses will drive this number up considerably, often resulting in 15 punts. Now let's say a commercial break is inserted 50% of the time after punts. So if you have 15 punts and get eight commercials, that would mean a loss of seven plays under 3-2-5-e. As for fumbles and interceptions, again we will go with a commercial break being inserted 50% of the time. So if you have five turnovers, at least two and possibly three plays will be lost. With 10 kickoffs, that puts you right at 20 plays. Now if you don't believe us, read what Darrell Moody wrote in the Nevada Appeal, where Hawaii coach June Jones predicted his team would lose between 12 and 15 snaps because of the rule and that the lost plays would cost the Rainbows 14 points.
Posted by dawizofodds at 3:20 AM

Awesome work, Marty! Do you have a source for this information?

what the hell are they thinking with this rule? gonna really hurt some teams who come up just short at the end of a game.

I think the TV angle is the key. I think game broadcasts will stay the same length but number of ads will increase.

CBS would shove a commercial between each play if they could, and aren't too far from that in their SEC coverage.

I created www.cfbstats.com. The play type information is not on my website, but I have every play from 2005 in my database, so I just pulled it from there.

Once we get into the 2006 season, we should be able to see what kind of impact the rule change has made compared to 2005.

Check your email at cfbstats, or send me an email directly at dawizofodds (at) aol.com. I want to chat with you ...