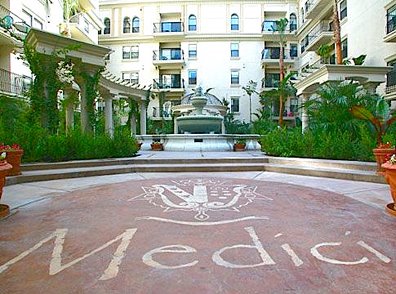 Welcome to the Medici, the former home of quarterback Matt Leinart and receiver Dwayne Jarrett. Now the upscale apartment complex in downtown Los Angeles is home to the latest controversy embroiling USC. Jarrett paid less than half of what Bob Leinart, the father of Matt, said was a $3,866-a-month lease, and the Trojan receiver reportedly owes Bob Leinart about $10,000. Each player paid $650 a month and Bob Leinart made up the difference — $2,566. Now making up the difference for son Matt's share — $1,283 — is not the problem. But also paying Jarrett's $1,283 share could be considered an extra benefit and possible violation of NCAA rules. University compliance officials are investigating. The players moved into the Medici last June after the Leinarts became concerned over Matt's safety at his previous residence near campus. According to the Leinarts, fans started following the Heisman Trophy winner, who guided the team to the 2004 national championship, to his residence and some would wait outside for his autograph. Matt's mother, Linda, told the L.A. Times she was "freaking out." Leinart has exhausted his eligibility — he was selected 10th in Saturday's NFL draft by the Arizona Cardinals — but Jarrett, who was one of three finalists for the 2005 Biletnikoff Award, is entering his junior season. Jarrett thus becomes the first active member of the team to directly be drawn into a ring of alleged potential violations that started a week ago with reports of the parents of former tailback Reggie Bush living (rent-free, it is alleged) in a $757,237 house that was purchased by an aspiring sports marketer. In a nutshell, what we have here is the appearance of a major scandal brewing for a team that had a 34-game winning streak end with a loss to Texas in the Rose Bowl.
Update: Pro Football Talk is suggesting that Bob Leinart, who has taken a more active role in his son's representation, may have crossed the line and somehow become an "agent" for his son. Thus the questions regarding potential extra benefits surrounding Jarrett.
Posted by dawizofodds at 1:33 AM