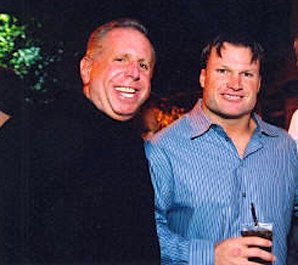 More damning reports for USC and Reggie Bush, who won't be the No. 1 pick in Saturday's NFL draft. (Are you kidding me, Mario Williams? Good luck with that one, Texan fans — that is if any remain.) The developments come from four sources: Los Angeles Times, Miami Herald, San Diego Union-Tribune and Pro Football Talk, an excellent site we encourage you to visit for draft updates. The Times' piece — a bit meandering, we must say — advances the alleged connection between LaMar Griffin, Bush's stepfather, and New Era Sports & Entertainment. Griffin, as it previously had been alleged, was in part responsible for starting the company, but the startup date has been pushed to 2004, meaning NCAA infractions could have been in play during USC's national championship season. The Union-Tribune also dates cash payments since late 2004 from investors in New Era to Bush's parents. NCAA investigator Angie Cretors will be in San Diego early next week to begin a probe, the U-T reports. And issues are being raised over Mike Ornstein (marketing) and Joel Segal (agent) — the management team Bush eventually selected over, among others, New Era. Ornstein (pictured left, with Zack Thomas of the Miami Dolphins), who previously worked for the NFL, reportedly pleaded guilty to defrauding the league of $350,000 and was sentenced to six months in a community correction center, ordered to pay more than $160,000 in restitution and put on five years' probation. Ornstein, the Herald reports, was negotiating a deal with a New Jersey memorabilia dealer on behalf of Bush days before USC played Texas in the Jan. 4 Rose Bowl. Ornstein is alleged at one point to have asked by email for a $500,000 payment. Needless to say, this is a big NCAA no-no. In his defense, Ornstein said he was merely soliciting offers in preparation for presentations to prospective clients, at one point calling it a "pretty standard practice." Ornstein also hired Bush as an intern in the summer of 2005. ... As for Segal, the Times reports he was fined and suspended for one year by the NFL Players Association for providing money under an assumed name to a Florida State player in 1993. T.J. Simers of the Times takes a swipe at Ornstein, Segal and USC coach Pete Carroll in the second item of his column (some registration).
Update: The L.A. Daily News reported that former USC tailback LenDale White, who tumbled to Tennessee with the 45th pick of the draft, failed a drug test at the NFL predraft combine in late Feburary. Thanks to reader Kevin for this.
Posted by dawizofodds at 2:14 AM

The reports of extortion were premature.

In a related development, the NFL and its Players Association are investigating alleged improper activity by certified agent David Caravantes, and have yet to come to a conclusion, contrary to a broadcast report.

I keep reading about Bush's involvement in something shady, and the name I think of isn't Reggie.