Texas, Consider This Your Last Warning 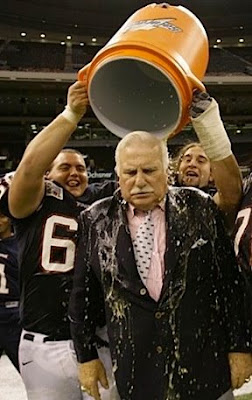 Not every team can march into Darrell K. Royal-Texas Memorial Stadium and come with a victory, but on Aug. 30, the Florida Atlantic Owls plan to do just that.

Coach Howard Schnellenberger told the University Press, Florida Atlantic's student newspaper, that his team is ready to take the Longhorns out behind the woodshed for a good old-fashioned beating.

"Once we step out on the field with Texas, the only ones who can help us is ourselves. Texas always has a very polished team that has great talent, but they aren't tough, they aren't a physically tough team.

"My defense will get to a point where they will be mean, nasty and ornery bastards and that’s what you need for Texas. Texas will move the ball with tit-for-tat, screens and options, but we’ll make them pay a price whenever they catch one of those dinky passes. We’ll put three hats on them and make them not want to get up, that’s the way to beat Texas."

Florida Atlantic is a 23-point underdog.
Posted by dawizofodds at 10:15 AM

I absoltuley love it!! Texas has always been soft. its a mack brown team. UNC's two great teams under Mack were soft as well!!

What an idiot. Why wake a sleeping giant? Longhorns by 40.