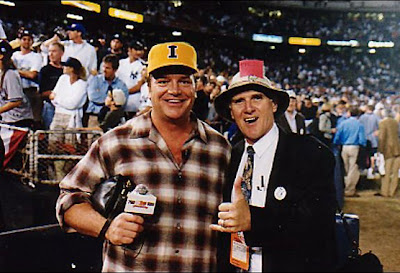 Seriously, what have the good people of Alabama done to deserve this?Tom Arnold, left, the pride of Ottumwa, Iowa, whose erratic behavior has become a source of embarrassment to Hawkeye fans, has apparently turned his back on his former university. He was spotted Thursday in Tuscaloosa, schmoozing with Nick Saban, joking with athletic director Mal Moore and attending an Alabama practice.

Arnold, whose major Hollywood accomplishment was marrying Roseanne Barr, reportedly claimed his son will one day play at Alabama.

One problem with this. Arnold doesn't have a son. At least not yet.

This came shortly after a report that Saban may have complained about his being shorter in a Coca-Cola advertising campaign using a cardboard cut-out of the coach alongside colleagues Tommy Tuberville and Houston Nutt (thanks to EDSBS). The cut-outs were eventually made the same size, much to the surprise of Nutt, reportedly the tallest member of the three Southeastern Conference coaches.

All this followed our earlier report of Alabama bringing in the Pacific Institute to help players with mental conditioning/character development issues. An anonymous reader took note of the affirmations given to Crimson Tide players and came up with one for Saban:

"I am the unquestioned master of my domain. My power frustrates all who live in my world. There is nothing regarding the football program that is not under my micro-management control. My power is important to me! I will out-recruit, out-work, out-earn and out-maneuver any and all of my coaching peers. I am committed to returning Alabama football to its rightful place among college football's elite. I will entertain other job offers if they offer me more money but I will believe my own words when I say that I am not interested in other jobs. My methods are perfect. I close practices unless allowing in certain people benefits myself or my program. I learned by secretive ways from the best but I am even better than my teachers. I control the media! I control the fans! I CONTROL ALABAMA FOOTBALL!"
Posted by dawizofodds at 2:48 PM

looks like a lot of ppl are reading your material. LOL.