Make It a Bud Light 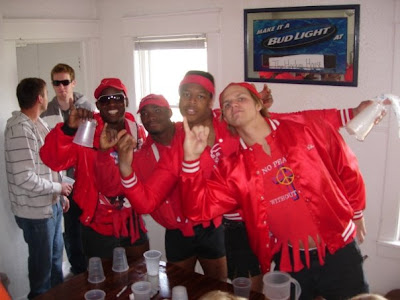 Score one for The Big Lead. That's Notre Dame quarterback Jimmy Clausen on the right, partaking in something called the "Beer Olympics." Also in the photos (there's another on The Big Lead link) are linebacker Brian Smith, running back James Aldridge and an unidentified fourth person, according to Michael Rothstein of the Fort Wayne Journal Gazette.

What will become of this? Little or nothing once you consider the evidence. Nonetheless, Notre Dame officials are promising a full investigation.

Although Clausen has yet to turn 21 (Aldridge turned 21 last month), there is no time stamp on the photos. And there is no evidence of Clausen or the other players drinking any illicit beverages. What the players are guilty of is bad judgment, especially Clausen, who was cited last year for the obscure law of transporting alcohol as a minor.

Clausen was reportedly punished for that transgression by Crewcut Charlie Weis, but the real punishment came when he was named the starting quarterback for a team that gave up a record 58 sacks.
Posted by dawizofodds at 5:33 AM

I'm so sleepy with these non-stories.

why to they all look like a bunch of unicorn loving fairies???

Oh, it's Notre Dame, I forgot!

You can see the empty cup upside down in JC's left hand partly behind his back. What a weirdo Cali tool this guy has turned out to be. I heard there are other photos.....