It's Back to Barrow to Kick Off the Season 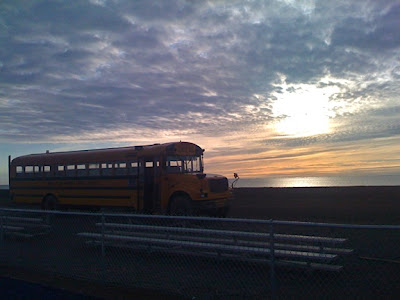 Not-so-legendary copy editor James Brooks occasionally reports on Alaska news for the Fairbanks Daily News-Miner, the farthest north daily newspaper in North America. Before working at the News-Miner, James worked for the Florida Keys Keynoter and graduated from Virginia Tech in 2003 after working for that school's sports information department and the Collegiate Times, Tech's student newspaper. He was in Barrow, Alaska, over the weekend when the Barrow High Whalers kicked off the season against the Skyview Panthers.

BARROW, Alaska — It's Saturday and across the country, football players are at or headed to camp, getting ready for the season. But at the northernmost town in the United States, the season has begun.

When you get off the plane in Barrow, the first thing you notice is the tundra. There are no trees, barely a fringe of grass and a landscape devoid of color. It's simply too far north for anything to grow.

On Saturday, the day of the Whalers' season opener, the temperature hovered in the high 30s, but the wind blowing off the Arctic Ocean made it seem at least 10 degrees colder. There are no trees or hills to break the wind, just the Arctic plain stretching in three directions and the iceberg-dotted Arctic Ocean lurking to the north. This was a nice day.

A few weeks earlier, the wind had gusted to 40 mph during a Whalers' practice. Snow fell during one late July practice, thick enough that the players were able to lie down on the field and make snow angels. 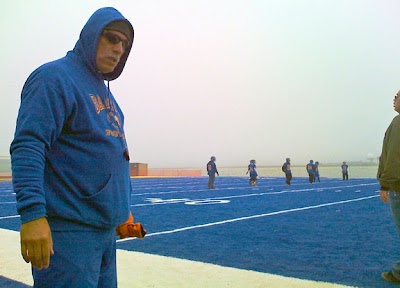 The Whalers practice regardless of the weather. Coach Mark Voss might cut practice short if the weather gets extremely bad — blizzard conditions, minus-40 or 50 mph winds. But even then, the team will briefly brave the conditions to get used to weather that can roll in at a moments notice off the Arctic Ocean. If it's blowing and snowing, or if the temperature drops below zero, that adds to the Whalers' homefield advantage.

But outside of gusts of wind that played havoc with kicks and punts, the weather wasn't harsh Saturday when Barrow played host to the Skyview Panthers from Soldotna, which lies at the opposite end of the state.

A year ago, ESPN, CNN, ABC, NBC and Pro Football Hall of Famer Larry Csonka were on hand as the Whalers opened their season against the Seward Seahawks in front nearly 2,000 spectators. On Saturday, I was the only member of the media present, and the crowd could charitably be measured at about 200. But they made up for their lack of numbers with the strength of their cheers.

And they come to see the beautiful, blue-and-gold field. One of the Skyview players called it "Boise State in the far north." Voss simply calls it a "million-dollar field." The artificial turf cost nearly a million dollars to manufacture and ship to Barrow, all made possible by Cathy Parker, a Jacksonville, Fla., woman who started a fundraising project titled Project Alaska Turf.

The turf, resting on a narrow strip of land three miles north of Barrow, provides a splash of color that is unmatched. Houses in Barrow are mostly unpainted, baring their raw wood or corrugated metal to the outside world. The few with paint show peeling, flaking, faded faces. But even those muted colors are at least a mile from the field, which sits in the middle of an open space surrounded by gray clouds, fog and the dark, icy Arctic Ocean.

Getting to Barrow is an adventure. The city of 4,065 sits at the northernmost tip of the state, 320 miles north of the Arctic Circle, and after the Russian city of Tiksi, is the second northernmost town of more than 4,000 residents in the world.

Barrow is about as far from Soldotna, Alaska, and Skyview High — Saturday's opponent — as the International Falls, Minn., is from the Arkansas-Missouri border. The Whalers compete in the Greatland Conference, which covers an area greater than the size of Florida and holds fewer than 100,000 people.

It isn't cheap to fly teams across such distances. Barrow High has to spend more than $200,000 a year on travel — both to fly the Whalers to other schools and to fly those schools' teams to Barrow. A fundraising campaign and help from the North Slope Borough School District make it possible, but Voss worries what might come if the school district has to cut costs. Fundraising has been made more challenging by a sagging economy. 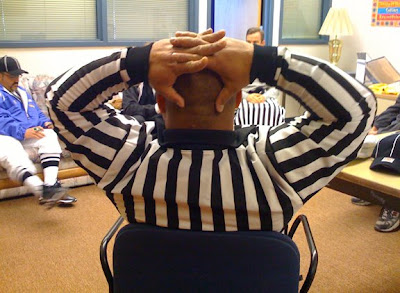 The team has managed to cut costs by using local officials instead of flying them in from Fairbanks (500 air miles) or Anchorage (725 air miles). On Saturday, five officials who were in town or part of the school's effort to get local people certified by the Alaska State Athletic Association worked the game.

One of the officials was Gary Lamar, who had been a high school coach in Texas and had been in Alaska all of five days. Lamar was hired by the school district to teach and coach eight-man football at Point Hope, Alaska, a town of 757 that is even more remote than Barrow. He agreed to delay leaving for Point Hope after a local official said he wouldn't be able to work Saturday's game.

The other four men included teachers, a resident and a former Barrow basketball coach who had recently returned to the area. They, like players from Barrow and Skyview, enjoyed the opportunity to be a part of something unique at the top of the world. 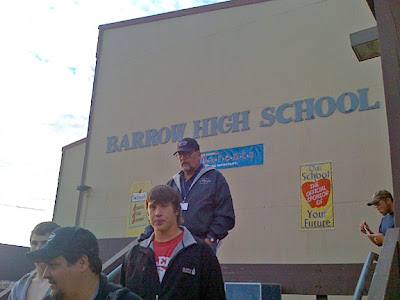 Skyview's team arrived Friday at 8 p.m., and players had dinner at Barrow High before boarding a bus for a trip to the field. Upon arrival, they swarmed across the blue turf, tossing a few footballs around and daring each other to jump in the Arctic Ocean less than 100 feet away.

Skyview players praised the playing surface, saying it was the best they'd seen in Alaska. Before leaving, they gathered at midfield, promising each other that they'd jump in the ocean if they won.

But Saturday belonged to the Whalers, who won, 36-27. In many respects, it was a classic high school game — inexperienced officials, players not fully comprehending the playbook, enthusiastic fans and a public address announcer who was wrong more often than not. But the fact the game was being played in Barrow, a place separated from the rest of the world, gave it special importance. 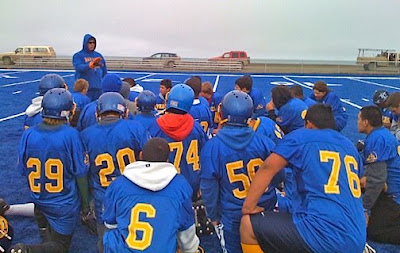 Barrow is at the edge of the edge, separated from a state that is separated from the rest of the United States, but football somehow seemed to be a connection impervious to distance. As I sat watching the game, keeping stats from a painted platform above the field, I couldn't help but think that kids across the United States are doing this exact same thing — in Texas, Florida, Maine and Montana.

The thought made me shiver, and for once, it wasn't from the wind.
Posted by dawizofodds at 12:03 AM

great article! Even though I enjoy the plethora of articles on how awesome OSU v USC is going to be (Go Trojans!) and the other usual stuff... it is great to hear about stories like this. By the way... how long did it take to get up there?

Fortunately, it's only about a two-hour flight up. We recently drove up the Dalton Highway to Prudhoe Bay as well, and that was about a 15-hour drive for a comparable distance.

It was great to hear about the kickoff to the Whalers 2008 season. I had the incredible honor of being in Barrow last year as a photojournalist from Florida to document the first game on the "million dollar field". Actually, I have covered this story since Kathy Parker and the Bartram Trail football team first announced their ambitious plans to raise money to put the field in Barrow. Most of you will never know the incredible amount of work, cooperation and faith it took to accomplish such an amazing feat. There were numerous obstacles and unbelievable logistics encountered right up to the field arriving in Barrow. So, it was wonderful to read the team was successful in the first game of their 2008 season! Go Whalers and thank you for allowing me to share in the wonderful spirit that exists so strongly in Barrow!