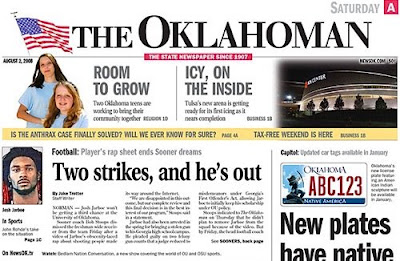 Josh Jarboe seemed to be a perfect fit at Oklahoma, a program full of history and tradition, national championships and uncontrollable players.

Back in the Barry Switzer era, there was one George "Buster" Rhymes. As the story goes, several players engaged in a snowball fight and Rhymes got hit. He went back to his room, returned with an Uzi and sprayed bullets into the Norman sky.

Rapper Chuck D of Public Enemy was so impressed with Rhymes' legacy that he gave fellow rapper Trevor Tahiem Smith, Jr. the name Busta Rhymes after watching him perform.

So what has changed in the 25-or-so years since Switzer's band of heathens ruled Norman? Dare we say the Internet?

In the 48 hours since we posted the video of Jarboe's rap on YouTube, it had been watched over 55,000 times. There were more than 550 comments, making it the No. 2 among Friday's most discussed videos.

Back when Rhymes and other Sooners were raising hell, it often went unreported. In today's world, even the slightest transgression can spread like a wildfire across cyberspace, creating a public relations nightmare.

On Thursday, Bob Stoops told Berry Tramel of the Oklahoman that he had no plans to boot Jarboe. "Kick a guy off the team for what he says?"

Stoops then added, "We're starting to talk about everything kids say and do. Now we're in people's homes, in their private spaces."

But as the Internet hits piled up, Oklahoma had no choice. On Friday, Jarboe was gone.

John Rohde of the Oklahoman applauded the move. "Whoever is responsible for dismissing freshman wide receiver Josh Jarboe, bravo," he wrote.

Whether Jarboe was treated fairly is a post for another day. This is about the Internet. It has changed the game and Jarboe's case is a prime example.
Posted by dawizofodds at 12:30 AM

It cuts both ways doesn't it? The kids have to be more careful because everyone has a cell phone that takes pictures/videos, etc. However, it seems these kids value their own publicity. They seem to crave that kind of attention. Jarobe was looking right in the camera, and he knew he was being video taped.

this kid is exactly where he needs to be ... off the team. his next line of edumacation will be in the state pen back in Jawja. scribble that on your napkin!

It's not exactly like this was the first thing he had ever done.
Jarboe wasn't going to get much benefit of the doubt because he had been arrested and expelled from high school for a gun offense.
Stoops just doesn't want his program turning into Penn State...

if Stoopids doesnt want his program turning into the one JoPa has, WHY DID HE GIVE A SCHOLARSHIP TO A GUY YOU SAID WAS EXPELLED FROM HIGH SCHOOL!!!???

oklahoma is the poster child for accepting football players and corrupt programs.

Jason,let me guess, you watch outside the lines and all of a sudden become an expert? Of course you do, you must love Stephen A. Smith, too.

If you are too retarded to do your own research, please refrain from commenting on a subject that you know absolutely nothing about.