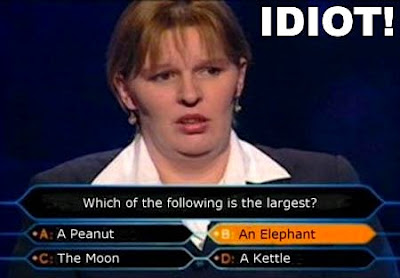 U.S. News & World Report has released its 2009 list of "America's Best Colleges." Congratulations to those Division I-A football-playing universities that made the top 25 — Stanford, Duke, Northwestern, Rice, Notre Dame, Vanderbilt, Virginia, UCLA, California — but let's get to the meat of the post: schools that didn't fare as well.

The associated ranking numbers of Tier I schools end at 130, so let's examine I-A universities in the bottom 25 of the 130. Louisiana State and Kansas State were ranked 130th, followed by Utah (127th).

Colorado State and Arkansas were tied at 125th, then came Arizona State (121st). Ohio, Kentucky and Washington State were grouped at 116, and Brigham Young and Texas Christian were tied at 113.

Rounding out the list were Oklahoma, Oregon, South Carolina and Tennessee, all tied at 108.
Posted by dawizofodds at 12:43 PM

Besides it is only undergrad rankings, the students at the top of the list bj'ed their way into admission.

Gotta admit, I'm surprised to see TCU near the bottom. I guess I always pegged them to be in the same category as SMU.