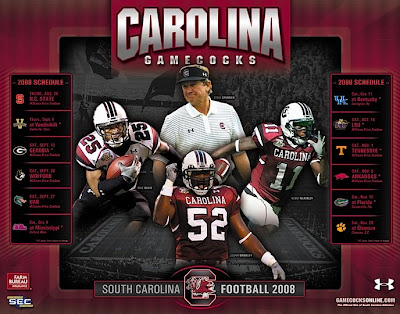 Today's poster schedule featuring South Carolina was sent in by Andy. A clean looking effort, but what does in-house critic reader Mike have to say?

"The Blake Mitchell era is over — was it me or did it seem like he was there forever? How will the Gamecocks rebound from a season that started with SEC title aspirations and ended with a five-game losing streak and no bowl game? Stepping outside the SEC, their schedule includes such heavy-hitters as Wofford and Alabama Birmingham. Overall, I think the truth is that Spurrier has taken South Carolina as far as he can; they just don’t stack up against the big boys in the tough SEC East that includes Georgia, Florida and Tennessee.

"The poster features seniors Mike Davis (No. 25), Jasper Brinkley (No. 52) and Kenny McKinley (No. 11), plus the old ballcoach himself. The poster is a little too heavy on the garnet for me. I also think the poster would work better if all three players were wearing a uniform with the same color, either all home or all away. Finally, I do not like the way they arranged the actual schedule on the side tabs. It looks like some sort of foldout arrangement. Hopefully a better season in 2008 will inspire a better design for 2009."
Posted by dawizofodds at 2:31 AM

Of course, the non-conference slate also includes NCSU and Clemson, but why mention the fact it's one of the toughest schedules in the nation (with UT, UF, UGA, and LSU other top 25 teams in the mix), take a shot at the 2 games we play which should be blowouts.

Actually I did mention the fact that it is hard to criticize the SEC for playing cupcakes outside the conference when the SEC itself is so brutal. It just got edited out.