A Snake Charmer or a Snake Oil Salesman? 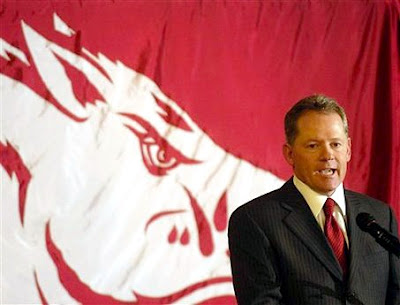 Bobby Petrino was the headline act Friday at the Southeastern Conference media days, and why not? The Arkansas coach, working on his third job in two years, had a controversial departure from the Atlanta Falcons, leaving the post without speaking to his players. Safety Lawyer Milloy taped a copy of Petrino's farewell letter to his locker and crossed out the coach's name, substituting the word "coward." Running back Warrick Dunn was more direct, call Petrino "a liar."

At Louisville, coach Steve Kragthorpe has dismissed seven players since taking over for Petrino in 2006, essentially blaming Petrino for recruiting players with discipline problems.

And let's not even get into the clandestine meeting Petrino had in 2003 with Auburn officials.

A poll of media members conducted by the Mobile Press-Register ranked Petrino last among SEC coaches in terms of media savvy, public speaking and friendliness/media accessibility.

Is Petrino being treated fairly? Here is a look at how papers in Louisville, Atlanta and Little Rock interpreted Petrino's appearance at media days.

Brett Dawson, Louisville Courier-Journal: Petrino, responding to Kragthorpe's comments, said: "We didn't have a discipline problem when I was there. ... we had players that were real focused, did a great job, went 41-9, and I think returned 21 starters off that Orange Bowl team. So, you know, I felt good about the way we left the program and the shape that we left the University of Louisville in."

Chip Towers, Atlanta Journal-Constitution: Petrino declined to discuss the details of his departure from the Falcons. "I don't think we need to get into that. It's something that I've put behind me and I'm sure that the Falcons have."

Wally Hall, Arkansas Democrat-Gazette: It was not the vicious feeding frenzy some thought it would be. Petrino did what he does best. He took center stage and was himself.
Posted by dawizofodds at 12:18 PM

What an astonishing news it is!