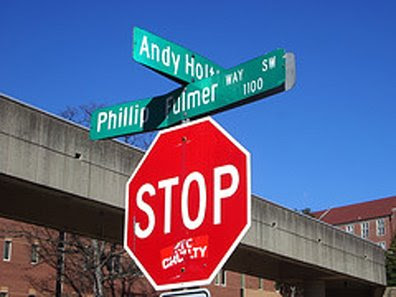 We're not talking breakfast, lunch of dinner. We talking subpoena. At least that is what legal channels suggest.

Fulmer, in Hoover, Ala., for the Southeastern Conference media days, denies being served the document, which calls for the Tennessee coach to be deposed Sept. 25 in Birmingham, two days before the Volunteers' game at Auburn.

This is all part of a defamation lawsuit brought by Chattanooga car salesman Wendell Smith against the NCAA.

Four years ago Fulmer refused to come to the event in suburban Birmingham and took part by phone, incurring a $10,000 fine from the SEC. Back then, Fulmer was being sought in order to testify in another case involving an NCAA investigation of Alabama.

Fulmer was asked Thursday about possibly being subpoenaed and denied he had been served.

"I have not seen a subpoena," he said. "This is not the place for that kind of thing. The great fans that are very passionate about the Southeastern Conference aren't interested in that kind of B.S."

Thanks to Richard of Map Game Day.
Posted by dawizofodds at 12:08 PM

Sloppy reporting by the folks up in Knoxville. Fulmer says he hasn't seen the subpoena, I haven't seen any quotes where he said he hadn't been served with it, which has been confirmed by no fewer than three people at the firm in question (one of them claiming to be a first-hand witness of it).